kas.lewis over 9 years ago

What were the biggest problems encountered?: null

Firstly Thank you to Element14 for allowing me the opportunity to do this road test. Secondly sorry for this road test review taking so long, I was planing on doing some testing with an environmental chamber and other interesting setups but after a few attempts to get access I have had to resort to other methods due to red tape and/or time.

The package is is very much down to business, after opening the box you are greeted with a quick guide sheet that lets you get going very quickly, (I must note no anti-static bag for the kit). The driver needed to communicate with the sensors on the board are all installed on the board. Opening a serial terminal you are up and running immediately. I prefer to use AccessPort for my serial communications as I find it simple and reliable and the usual recommendation of hyperterm is no longer free.

At first I was a bit disturbed since I was hoping to evaluate these sensors to see if they were worth integrating in a later test board I have planned. Unfortunately I could not find them on Newark's site and this put a big damper in my plans, I have since checked and they ARE now available at Newark. I have noticed that some people had mentioned using this as a IMU for RC helicopters or other such devices that may not need very high accuracy positioning. For such a purpose I would have liked to see a gyroscope added just to help with the sensor fusion and error cancellation between sensors.

There are three sensors included on the eval board (and a fourth on the development board). The prebuilt application supports only the three on the sensor board. The sensors are the MAG3110 is a magnetometer, the MPL3115 which is an absolute pressure sensor and there is the MAA849 which is a accelerometer. The pressure sensor has been placed on the board closest to the signal lines, while I have seen no real effects of this I may have preferred to see this more isolated on the sensor board. The sensors are all evenly spaced and centered on the board, while this does look aesthetically pleasing it may not have been the best placement for the component requirements.

MAG3110 Data looks pretty consistent over a ~12 hour period for the x axis the y axis looks noisy and the z axis looks like it has three values. Since the numbers differences are only one value apart (ie 74 - 75 for z axis) I would not be to worried about using this for most of my applications or those that his sensor is designed for. I have done this test with a very basic form of shielding around the test board and had it near my laptop where the fan may come on periodically (I’m not sure if it did since I was sleeping). There were two considerations for night time testing, 1) less people moving around and 2) less sun activity. I am hoping to do a test at a later date to test repeatability. I would like to use LEGO Mindstorms to rotate the board 360° and take a measurement at each stop point. While this sounds like a good idea there are various obstacles to getting it done quickly and easily. 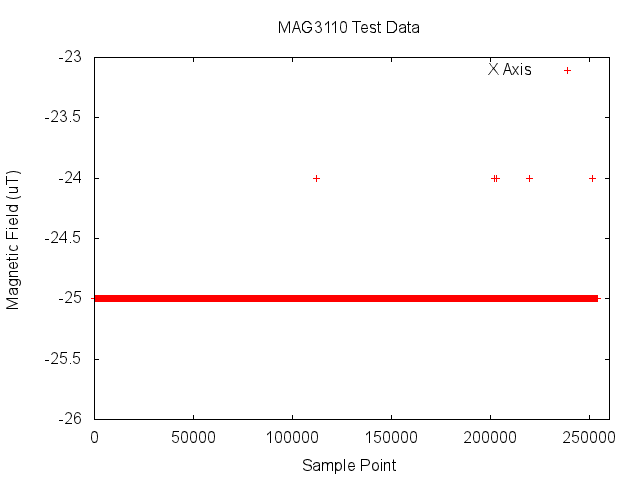 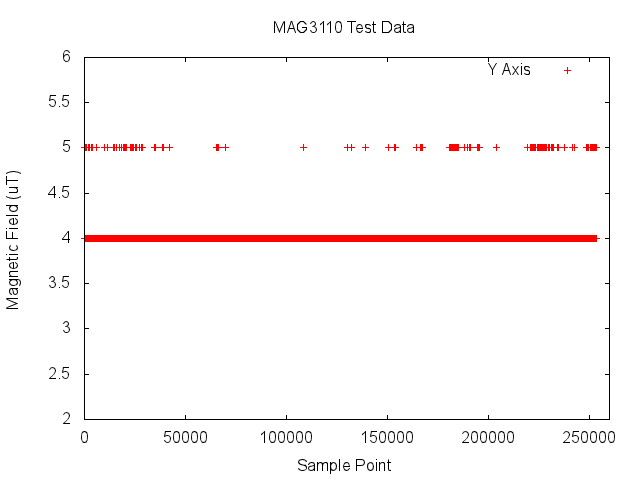 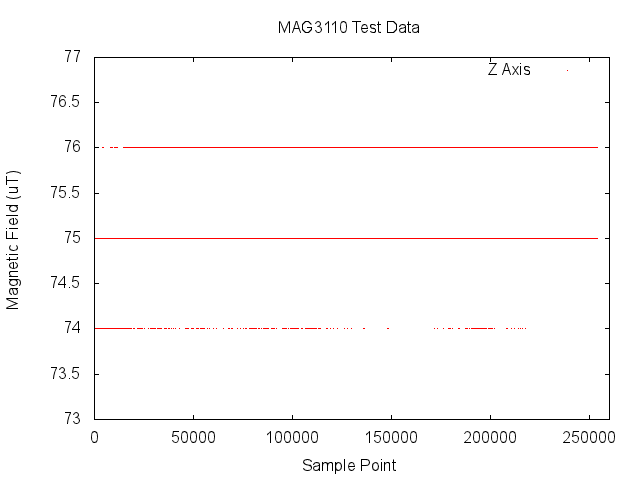 MPL3115 data at first worried me since it changes a lot over time. This worry was partly put to rest by looking at the atmospheric data for may area (using the two closest airports) and looking the air pressure trend over that same time duration. Since the MPL3115 displays altitude and there is a messy equation between pressure and altitude, I over simplified everything and just assumed they are inversely proportional to each other (no this does not work very well but for back of the envelope testing it seems to give a reasonable result). The worry that this over simplification did not dispel was the initial values, over the span of 5 or 10 minutes there is an altitude change of several feet, 15 - 25 in some cases. I am hoping to do a bit more investigation into this as this could really prevent the usability of such a sensor. If I have to wait 20 minutes for my sensor to stabilize (in which time atmospheric pressure is naturally changing as well) the whole idea of using this as a altimeter gets complex and messy) 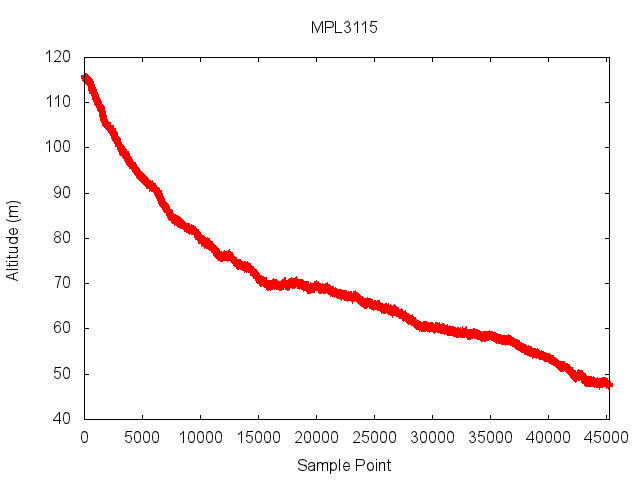 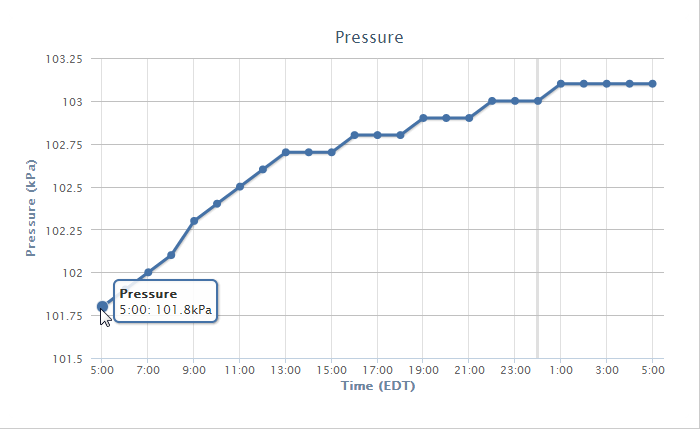 MMA849 was the most complex to test and I really would prefer not to give this sensor a review since I don’t think I have done it any justice in testing it. I have been trying to contrive a setup (that is not to complex) that would allow for me to test the Zero point of this accelerometer, all I have come up with at this time is an air table (used for laser and high precision measurement experiments) but as of yet I have not found anyone willing to let me use theirs. I have thought of comparing it to another (industry proven accelerometer) but unless both are sufficiently fixed to the testing mount (a lot easier said than done) this would be an exercise in futility.

What I have attempted to do is sample data over time and then use a line of best fit to see how close it comes to the expected value. I have included just the Z axis graph as they are all pretty much the same (very noisy). 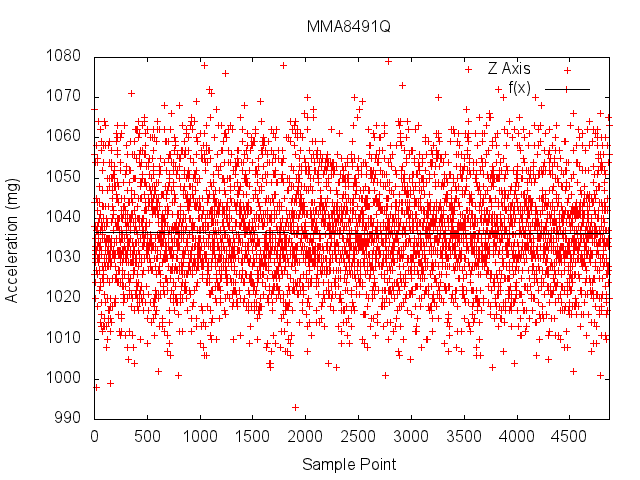 The offsets that I found for each axis are: x-axis -5mg, y-axis 10.93mg and z-axis 1036.4mg. while not very far from the expected values of zero and 1000, it must be remembered this is only after performing a line of best fit. By looking at the above graph it can be seen that the numbers are really all over the place.

I hope the above information helps those interested in these sensors. I hope to at some point if and when I get time to do further and more rigorous testing to get a better insight into at least two of the three sensors on this board. I will close with a quick pros and cons list, if you feel I have missed something or that I should maybe do something differently please let me know I would love to  really see what these things are capable of.

Newark’s delivery time...  (from end of road test to shipping date could have been faster)

No access to out of the box application code

Good product to do fast and dirty testing to see if it is a part that could work for you and could use further testing in your application.