What were the biggest problems encountered?: Getting the control over USB to work properly; but this was relatively straightforward

We have also produced a video review which shows some of the functionality that we’ve talked about here which is on youtube,

We use arbitrary waveform generators for a wide variety of applications on the embedded side, including simulating outputs from sensors, stimulating sensors & generating digital data including serial streams. We've been using this one for all our day to day needs, and we've been trying to really push this to it's limits-apparently this is capable, using a Cockroft-Walton Generator, of generating around 300V! We've been keeping a record of the main activities that we've used this for-if you think we've missed anything or would like anymore information-just let us know!

So, starting off with the unboxing. It's a well packaged device, and made the trip from America with no damage at all. The accessories are pretty standard, with a basic record of
calibration, the usual power power cords and a couple of CDs with the benchlink software for generating waveforms, and the drivers/info/manual for normal use and SCPI information; everything you need to get started. 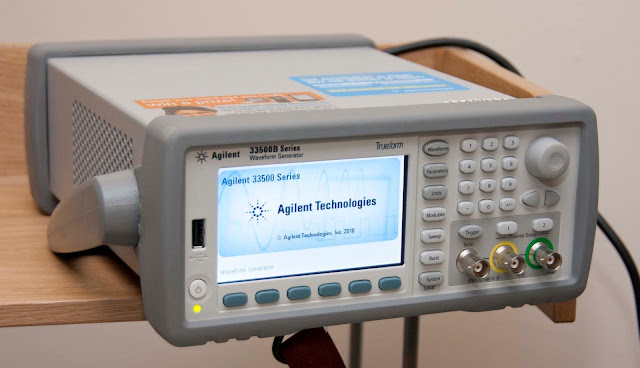 The case itself is the standard case for these Agilent bench instruments. It's a good practical design with enough rubber around the edges to give it a really rugged feel, but still feels great to use on the bench. At work we've got stacks of instruments in these enclosures up to 5 instruments high, and this gives a really compact bench footprint for the amount of gear you can stack.

The front panel is very similar to the previous incarnations of this waveform generator, and for good reason. The choice of buttons is superb and allows quick access to all the options really quickly, with enough dedicated buttons that you never need to hunt through menus to get to your options. I've tried giving this to several engineers at work, including non electronic engineers, and everyone can use it quickly without hunting through the manual.
The display on the front panel is the same as on the A series, and still a real step up from the old E33XXX series. If you see our video, the display hasn't come out as well in the video, but in real life, it can be read clearly from basically any angle and was readable in all the conditions we tried, from darkness to full daylight.

Right, so powering on the unit. It's pretty quick to power on, taking around 30 seconds. That seems to be about typical for most of these generators, with the tek units being slightly quicker, but still around 25 seconds. In use, I haven't found this to be an annoyance.

So, after we've powered up the unit, we started off with the basic signals. These all work nicely to specification, and the outputs are very clean for DDS generators. I've tried generating a 1mV pp sine wave at frequencies from 100kHz to 20MHz and the results are remarkably clean on an analog scope. That's seriously impressive, and a task I normally used to turn back to an old HP3325A analog signal generator for.  The photo below shows a 1mV pp wave at 20MHz, 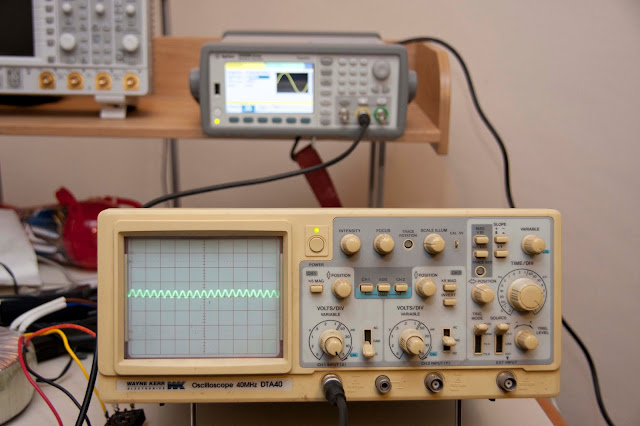 One basic waveform that's notable is the noise waveform, which has control over amplitude and bandwidth. As just a basic waveform, this isn't that useful. However, combined with the sum modulation, this is a seriously powerful tool for testing circuits on the bench. We've tried using this for testing the resilience of circuits that are going to be used in noisy environments. As a couple of examples, we used this to test the performance of a basic level shifter circuit. Adding noise to the random binary sequence output allowed us to see how much noise would cause false levels to be detected by the shifter. We also used this with a circuit to read the temperature from an AD590 chip, which senses temperature and returns the result in the form of a regulated current. Using the variable bandwidth of the noise functionality allowed us to determine an ideal cutoff frequency for the filter, as this circuit will be used in an electrically noisy test environment.

The other interesting part about the basic waveforms is the pulse generator. Agilent have claimed that this is sufficiently powerful to replace a dedicated pulse generator. I was initially sceptical about this, but after quite a bit of testing, I'm won round. You've got control over the usual period, on time etc. as well as full control of the rise and fall time. With the dual channel model, it's extremely easy to set up two pulses with full options to tie the frequencies together or as ratios, etc. One slight disappointment was setting the time between pulses as degrees, which required some work on the calculator. Agilent off the option to be able to set most other parameters in different units (eg, amplitude & offset vs. high and low voltages), so it'd be nice to give this as an option as well please?

We also tested the sweep and modulation functionality. As non RF engineers, I'll leave the detailed analysis of this to others, but it all seemed to work well and gave some textbook like displays on the spectrum analyser. One thing which was fun was using the sweep mode, combined with a scope in FFT mode & infinite persistence to plot the response of a filter. The poor man's spectrum analyser and tracking generator!

As you'd expect, the software support from Agilent is excellent. The Benchlink Pro software has loads of features, although we downgraded to the basic Benchlink to get an idea of what the functionality is like after the 30 day free trial, and we found that everything we needed was still supported. Very impressive, and as the same software is used for the high end waveform generators, it's likely that it'll be supported for many years to come.

As an alternative to using that software, importing csv files directly is well supported. I find this really useful when importing files from nonAgilent scopes and other acquisition systems, and this way I don't have an additional step of playing around with the benchlink software to change formats. This works beautifully and is extremely useful.

As the last part of the interface that we really wrung through, the LAN interface is great. You can either go directly into it using a web browser, or access directly using SCPI over LAN. One particularly impressive feature was, when using the browser interface, the ability to see which commands were sent to activate the requested setting. This should allow people to get started with automated test setups really quickly and brings the skill level almost down to the macro level in office.

Overall, this is a really impressive bit of test equipment. The functionality is absolutely vast, and I wasn’t expecting so much stuff to cover in our video and written writeups! I’d definitely say that it’s a step up from it’s competitors like the Rigol 4000 series and the Tek offerings. It’s extremely easy to use, with an extremely good display. This also allows features like the preview of what your waveform will look like; particularly useful when uploading arbitrary waveforms. The case is a nice mixture of rugged and compact, ideal for the usual lab bench usage. During the course of the review we’ve had this sliding around in the back of the car as well, so we can attest to the ruggedness. The Trueform technology is noticable when generating paricularly complicated waveforms and this definitely lives up to the claims. The pulse functionality is also very well implemented and outside of specialist testing, could certainly replace most dedicated pulse generators. Highly recommended!