What other parts do you consider comparable to this product?: I am familiar with printers such as the makerbot 2x which I have used at my place of employment for production of enclosures and other parts for use in the oil fields of Alaska.

What were the biggest problems encountered?: The initial unit failed, the system itself would overheat drastically and it also was extremely loud. The second unit is about the same loudness level as your average ink jet printer. The item being printed does not always stick to the build platform and when you print some items that are thin, there will be curling of the part as the ends lift up from the print bed.

The printer first arrived, the initial one and I was excited.  It was right before Christmas.

I know what you are thinking, this review is long overdue.  This is partially true, but only comes this late as I had to send the unit back.  It was shipped to Element 14, then to the U.K. then back to Element 14, then back to me.    When I first contacted Cel about the issues I was having, they were willing to help me out with some basic troubleshooting.  It turns out that some mosfets in the unit had failed and that it was drastically overheating.  There was also a huge issue with the extreme loudness of the unit.  The fans would run at full speed.

Upon receiving the unit back however, I was pleasantly surprised.  Cel had included a bag to lift the printer out of the box, this was a very nice touch.  The new printer is also much quieter.

I immediately began to print new items.  First, I went and tried to print part of a project I had been working on, a DIY VR head mount display.  Part of this process included a large flat piece and this was the perfect test in order to see how much curl shows up during the print.  In order for there to be minimum curl the temperatures of the build platform and chamber have to be correct during the entire print process.  The Cel reels contain a chip that supplies this information for each material and then sets the printer up accordingly.

The lens holder that I printed did shrink a bit, but that is the nature of ABS.  It would be nice if the software would automatically compensate for this and size it up slightly with perhaps a checkbox.  As you can see there is some curl and twisting of the piece.

To check the resolution I printed some miniatures used in table top gaming.  This is a good test as there is often a lot of detail in such figures.  I set the printer up as high as it would go and after loading an image hit print.

The first print required support and the software did give the option to include it by setting it to auto.

One feature I wish was included would be the ability to preview the support structure before printing.    I have concluded that the auto support material feature works the majority of the time, with one exception where the printer attempted to print part of a figure in mid air about 2 hours into the print.

After some fiddling with the controls and some calibration, here are the results.  If you examine the gun,  the printer would cause slight misalignment to the print job as it continued on the figure.  Conclusion, the printer has a hard time doing extremely small parts or fine detail.  Even when a support structure is printed with the object, it tends to move the object just enough to throw things off.

Next, a figure that does not require a support structure.

There is very little I can say about this, it came out better than I had expected!  The figure is smooth to the touch as the layering of the print was set to fine (about 30 microns).  I took this figure with me to the local makerspace and there was a lot of excitement over the resolution that this printer managed to achieve on this scale.

For the this print I selected the NASA wrench.  Unfortunately I was forced to stop the print as it became disconnected from the print bed.

The fill pattern is clearly visible, they opted for a crosshatch pattern instead of some other method.  This results in very strong parts.

Some of the material did not adhere to the print surface.  This seems to be the norm with this unit, smaller components do not stick to the print bed by default.  Larger items with a high surface area contact do however manage to stay firmly attached to the bed until it cools, upon which the item is released with minimal force. 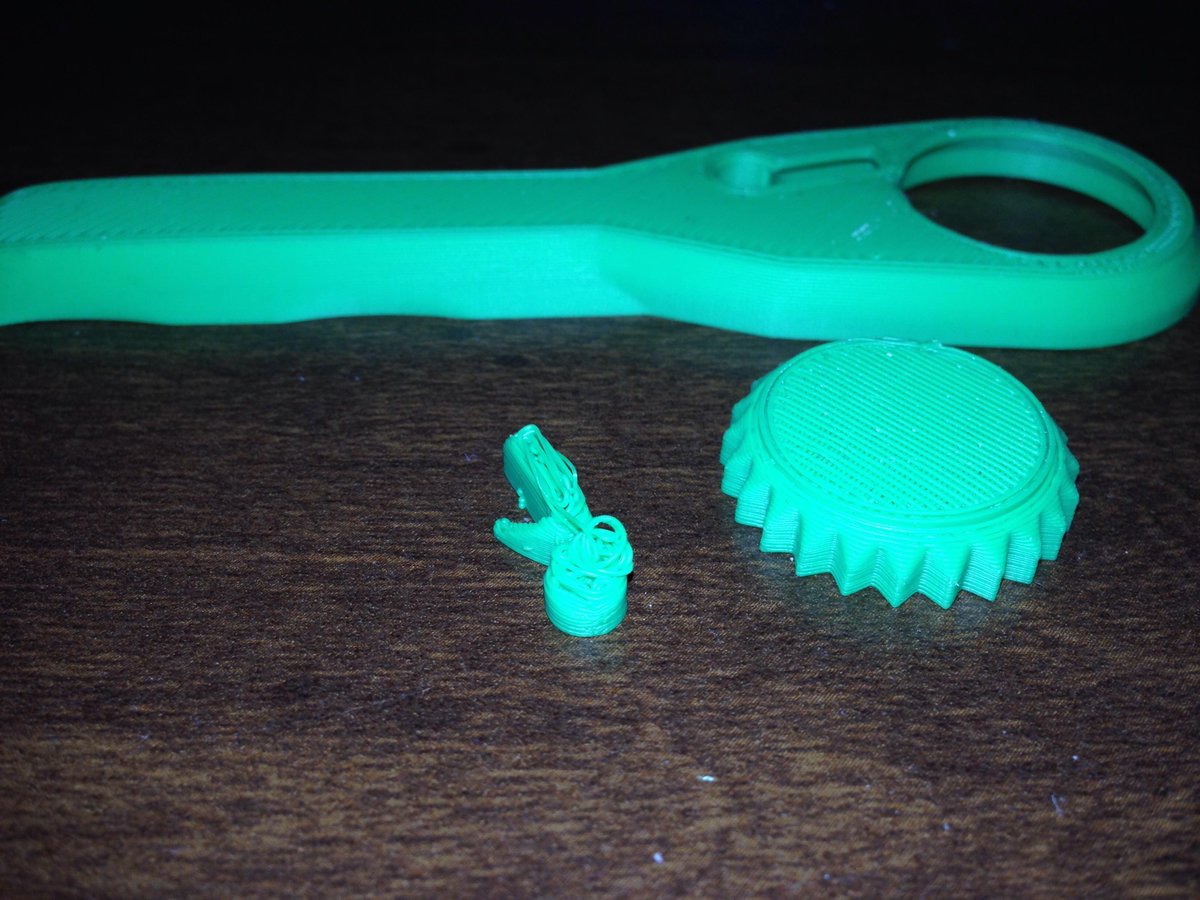 Next up, I switch the printer over to PLA.  After extruding the printheads using the purge function in the software I printed the following.

The resolution is very fine and I much prefer printing with this material over ABS.   I also had fewer issues with the print becoming dislodged from the build platform.  There was a very slight lifting in the corners however but nothing serious.  I give the Cel Robox printer + PLA  a huge thumbs up!

Would I recommend buying this printer?

Yes, simply put, this is one of the easiest printers to use that I have ever seen.  Within about 10 minutes of taking it out of the box you can be printing.  Even with the few shortcomings, many that plague all 3D printers, you will not find a more newbie friendly product on the market.

The Cel Robox team were very receptive to my inquiries  when the original unit began to fail.  It should be noted that the original unit was never intended to be sent out for review as it was a pre-production model.    The unit, after being shipped to the manufacturer took about 2 months to get back to me for this review.  Was I comfortable with dealing with them? Absolutely yes.  They handled the situation in the best possible way.

This printer now has a permanent place in my tool kit.  It is the perfect size to sit on the desk and has all the required capabilities you would expect in a 3D printer.

I decided that I wanted to show these images, it is of how well a part that was printed on the Cel Robox held up under months of stress in a wire spooler.  This particular spooler winds everything from silver satin to LMR-400 onto wooden spools, and I must admit, the part held up a LOT longer than I thought it would.  After 1 month of service it finally quit and you can see the failures in the image below.  This is a testament to the quality of part that this printer is capable of.  The part was printed using standard "normal" settings with a 40% infill.