What other parts do you consider comparable to this product?: As this product is highly flexible and full of features I chose not to compare to any other tool, because I couldn't find any that has all features or most of them.

What were the biggest problems encountered?:

I hope you all enjoy this RoadTest.

For those who enjoy the cutting blade sound I leave hear the unboxing video.

Short: Yes, I believe and do.

Long: In the last project in the company I was writing code to interface with sensors ( I2C, UART, SPI) and I used AD2 for this. Since the limitations of AD2 are within your need there is space for you to use it.

Short: Yes, it’s perfect for you.

Long: AD2 by concept was designed to be an educational tool targeting hobbyist, students, and enthusiasts. The tool is quite straightforward to use, requiring only you to download the Waveforms IDE and take the Tutorial Videos that cover ALL you need.

Getting started with LabView

As a fast way to learn about AD2 and LabView integration, I certainly would suggest trying first the watch tutorials of each program separately in case you are completely fresh to one or both of them. This would give a good understanding of the capability of each tool and moreover I didn’t find a material like getting started with both at the same time, but some blog posts. Actually, I tried to run the examples of integration that come installed with LabView, but even though I could run them and see the results, at first, I had no idea what was going on since I never touched it LabView before. Then, I came back to the examples after this tutorial.

LabView2014 can be downloaded through LabView Maker Hub website as a 45-Day evaluation, but after installation just enter the serial number for the home bundle. After that, I also installed the AD2 driver for Labview so that LabView communicates with AD2. After this, I had my LabView recognizing my AD2.

One important feature to note in LabView is that it works within two complementaries interfaces: Front Panel and Block Diagram. In the first, the user can see the graphical results of it’s work and in the second, the program ( which is fundamentally in block ). In the following video, I run an example that comes already installed in the installation directory.

In the video I showed only the front panel, therefore here goes the Block Diagram related to the example.

The instruments AD2 in LabView

As in the previous video, I only ran the example and now I show what is behind the user interface used, what does the LabView program look like.

There are some interesting resources to check which

In the second part of my roadtest, I go over the Waveforms software and develop a simple project in order to explore some AD2 capabilities.

The goal of this short project is to record the light intensity in my room through the window. For that, will be used a Flora board, which has a TSL2561 light sensor, and an AD2 as a controller.

In order to read the luminosity of the environment, a Flora is attached to the AD2 which reads out the I2C signals from the sensor and then through an algorithm parses the data received into the lux unit. After that, the data parsed is logged into a CSV file and then plotted into a graphic.

The TSL2561 is a light-to-digital converter with I2C output. It reads the light intensity from the environment through two diodes, one sensible to visible light and infrared, and other sensible only to infrared allowing to remove the effect of the infrared in the measurement according to an experimental algorithm. The diodes signals are converted into the digital domain and made available to be read from the I2C bus. Figure 1 shows a block diagram of the sensor.

Setting up the environment

Figure 2 shows the Flora board used in this project. Header pins were soldered in order to make the pins more accessible. 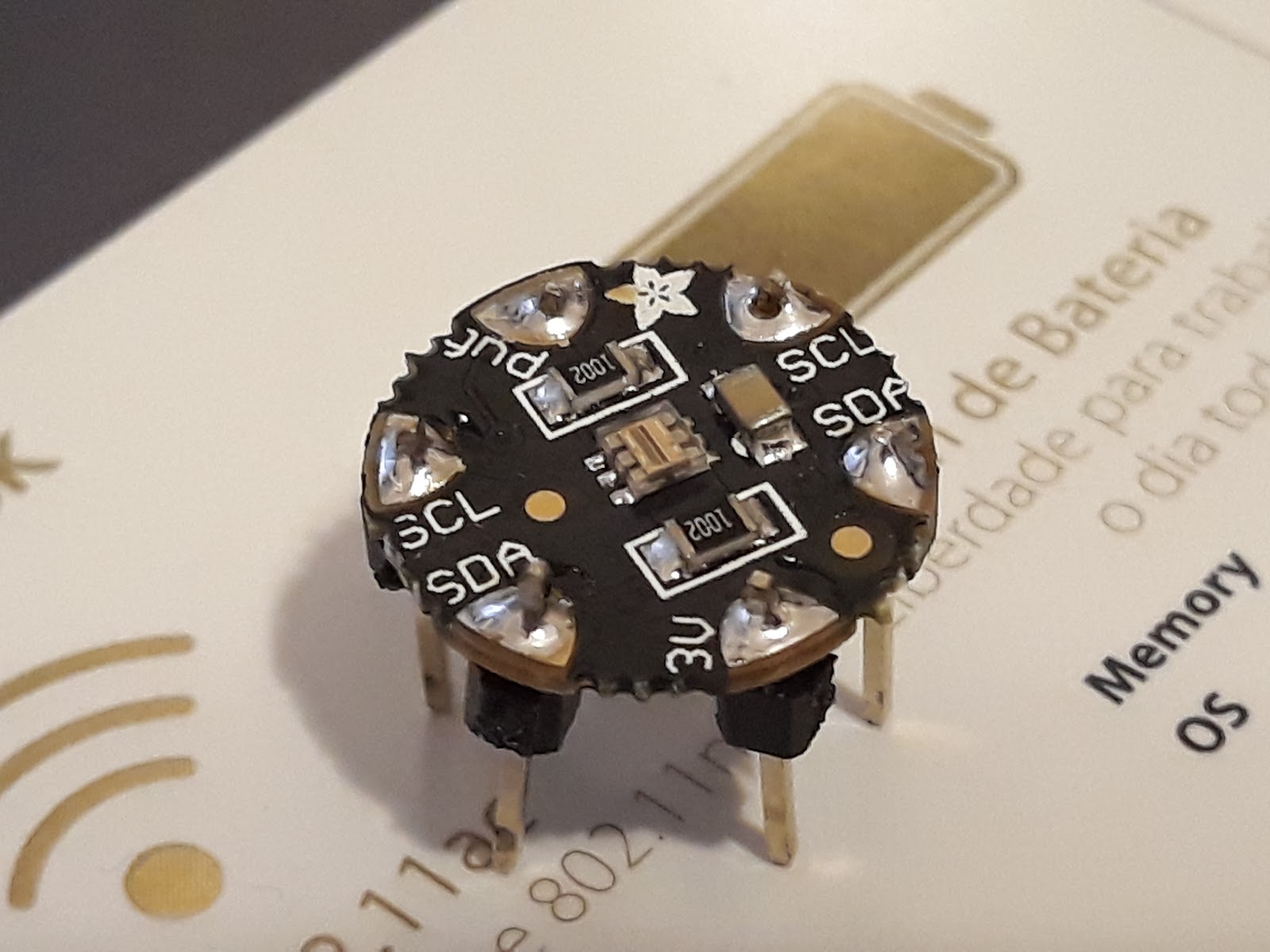 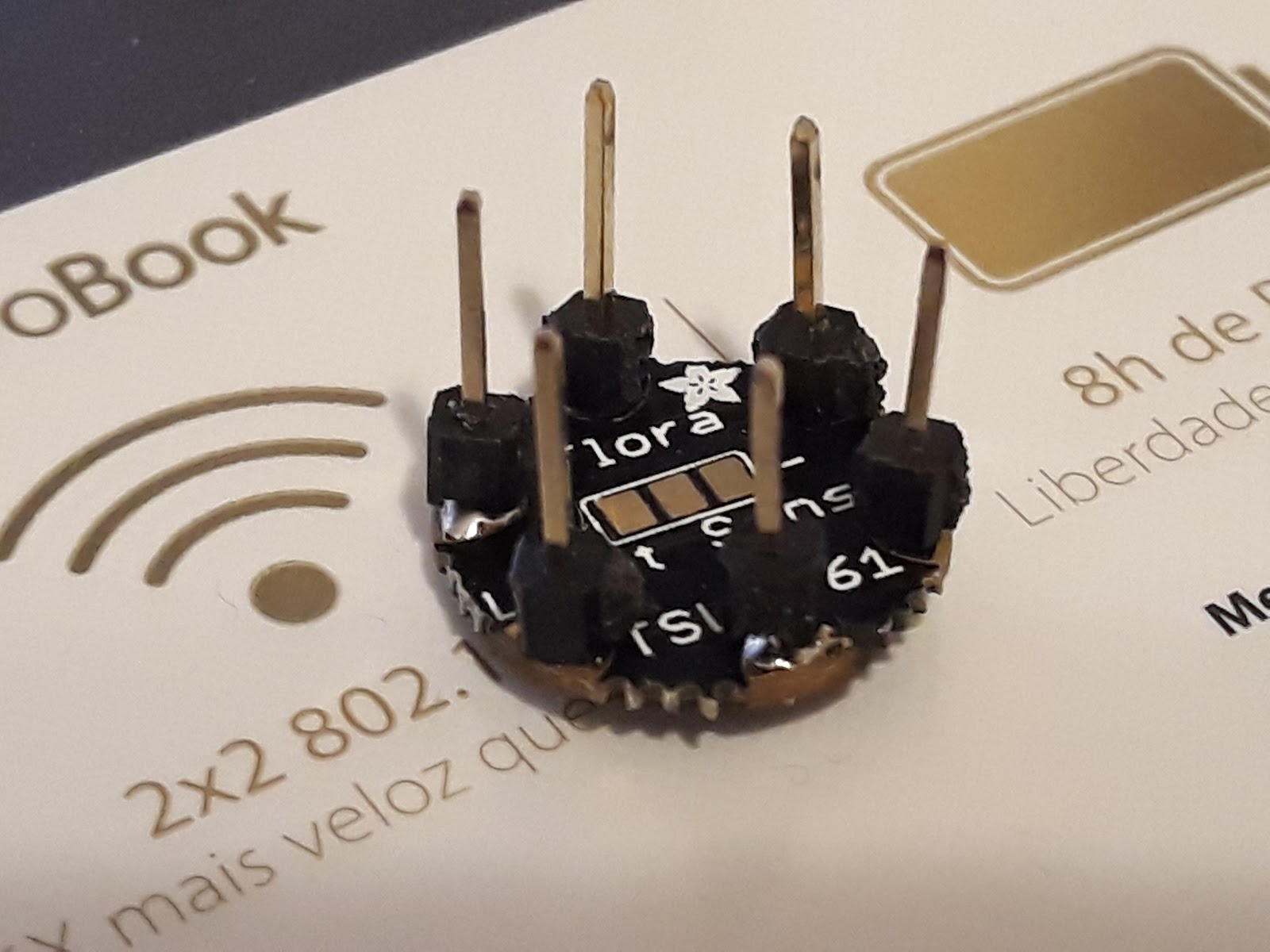 Then, the AD2 was connected according to Table 1. And the result is shown in Figure  3: 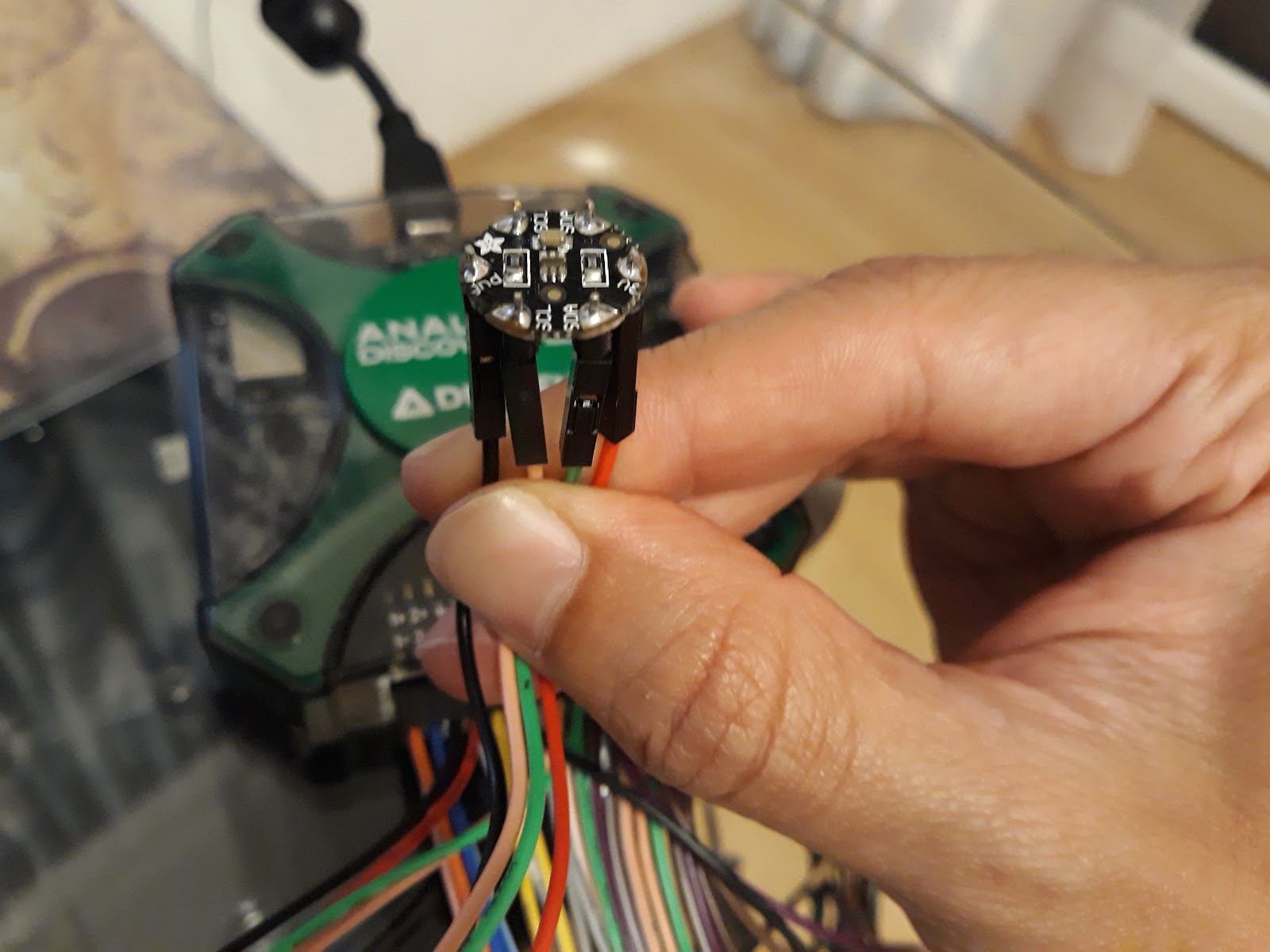 Figure 3: Connection between Flora board and AD2

As a first step, I used the tool Protocol I2C in the Waveforms Software to test communication between Flora board and AD2.

As for this project, I’ll be using AD2 to deliver power to the Flora board, the positive power supply (in supplies instrument) must be turned on at 3 Volts as shown in Figure 4.

After powering up, Flora should be ready to exchange data. Then, it’s time to open the protocol instrument in the tab I2C ( in master mode ) and configure the communication channel. Figure 5 shows in red the configuration used. The Address value h39 corresponds to the 7bit address of the TSL2561 sensor according to its datasheet as shown in Figure 6 when the address pin is left floating which happens in Flora by default. 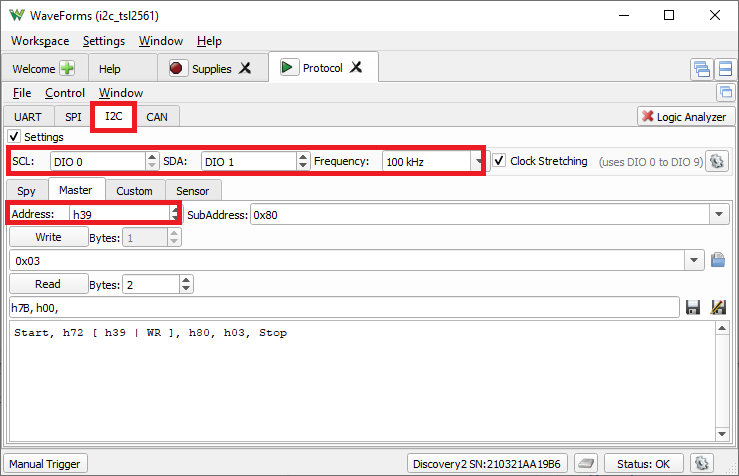 Once the communication is properly set, a command 03h to the CONTROL register of the sensor must be sent to the sensor in order to power it up internally. It happens that TSL2561 has only one register (Figure 7)  for both address(lower nibble) and control( upper nibble), then Control Register is accessible as address 80h  for the configuration I’m using. The complete addresses available can be seen in Figure 8. 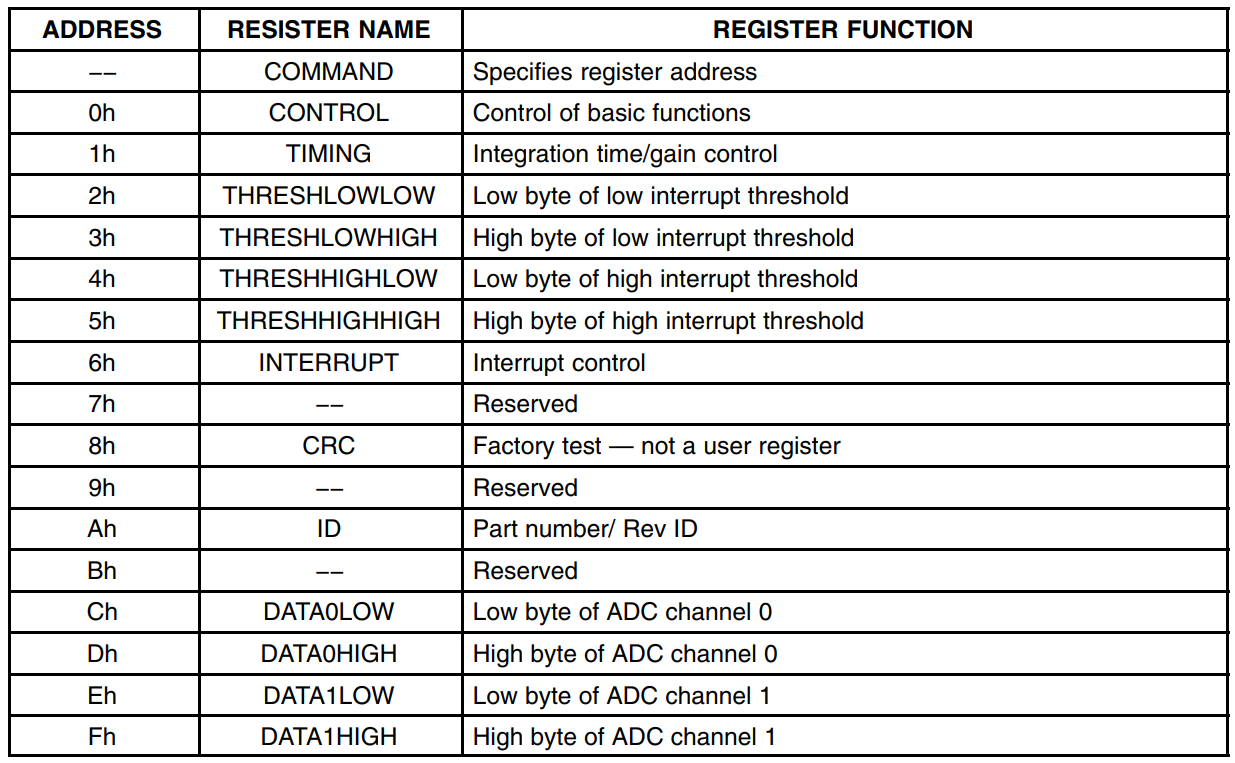 Therefore, in Protocol instrument, fulfill the fields SubAddress with 0x80 and the Write field with 0x03. After clicking write, the interface should look like Figure 9. It’s important to note that the ACK bit is omitted. 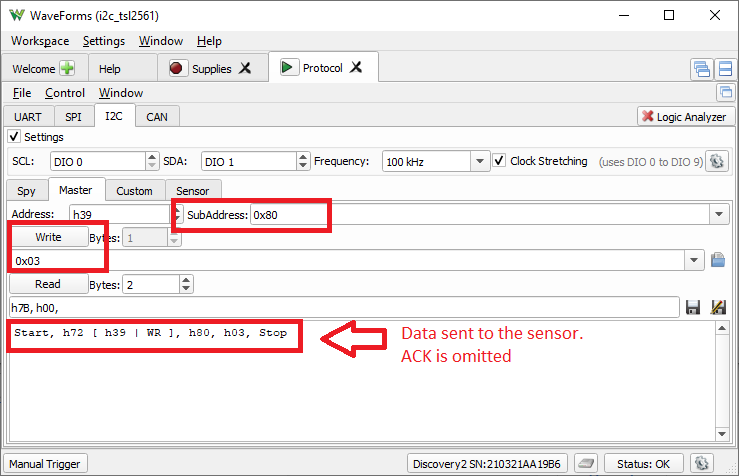 Now, that the sensor was acknowledged the next step is to read the registers that contain the digital values converted correspondents to the ambient light measured, namely Ch and Dh as Channel0, and Eh and Fh as Channel1. This can be accomplished by reading 4bytes in sequence starting from register Ch.

Therefore, fill the SubAddress with 0x8Ch and the field Bytes with 4 and then click Read. The resultant data stream should be like Figure 10. Note that, the data will differ as a consequence of different ambient illumination. 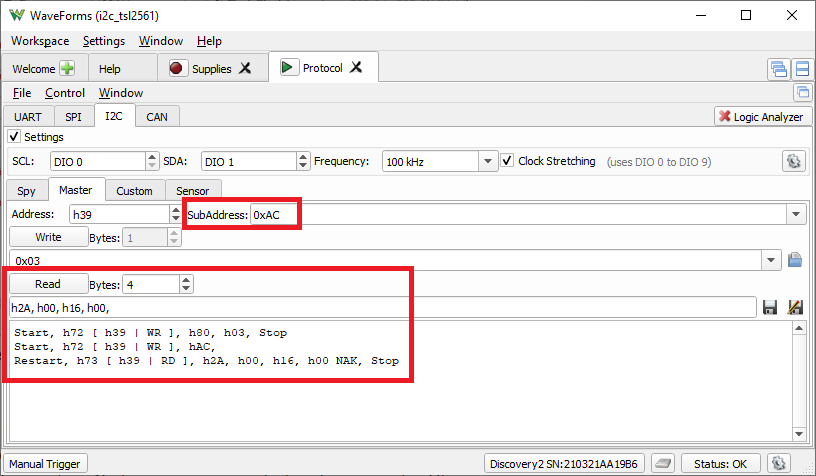 Up to now, the following tasks were accomplished:

Then, the next step is to convert the data read from the sensor into luminosity intensity (lux) and record this data into a file. In order to achieve that, create a script is necessary.
Still, in the Protocol Instrument under the tab Sensor (Figure 11), scripts can be written in javascript and then run through the button ‘Execute’. There are also short instructions on how to use it. Even easier is to open an example under the tab Example and see how to interact with AD2. And based on the second option a script was written to fulfill the last project requirements. 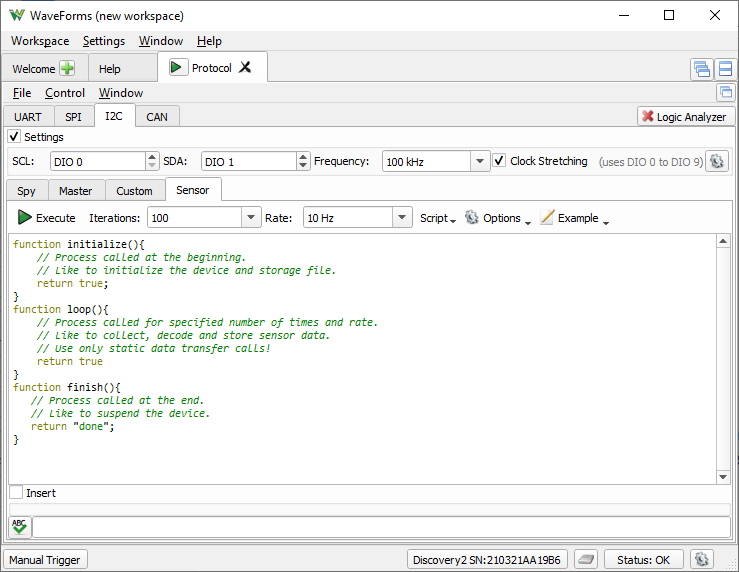 In order to test the script ( attached ) written, a test was set at 50 iterations and Rate at 1Hz ( see Figure 12). The test consists in approximate a light source to the tsl2561 sensor and leaves the script running in the meantime, the values measured are recorded in a CSV file and then imported into Excel and plotted into a graph for ease visual analyses. 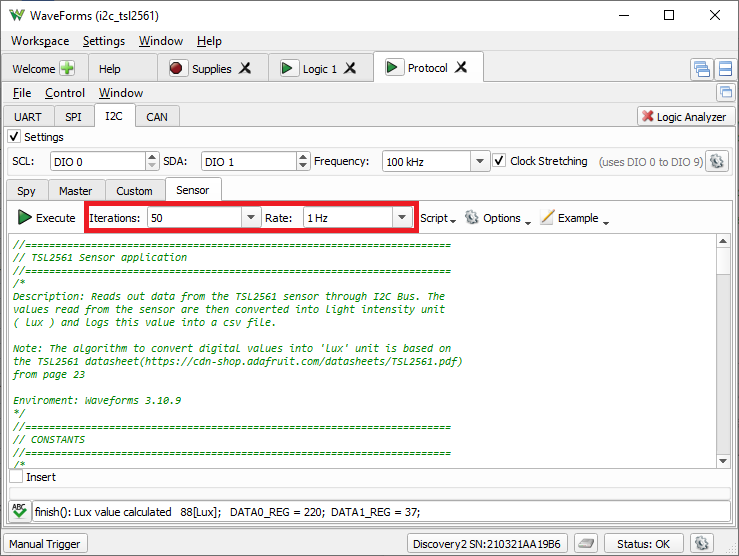 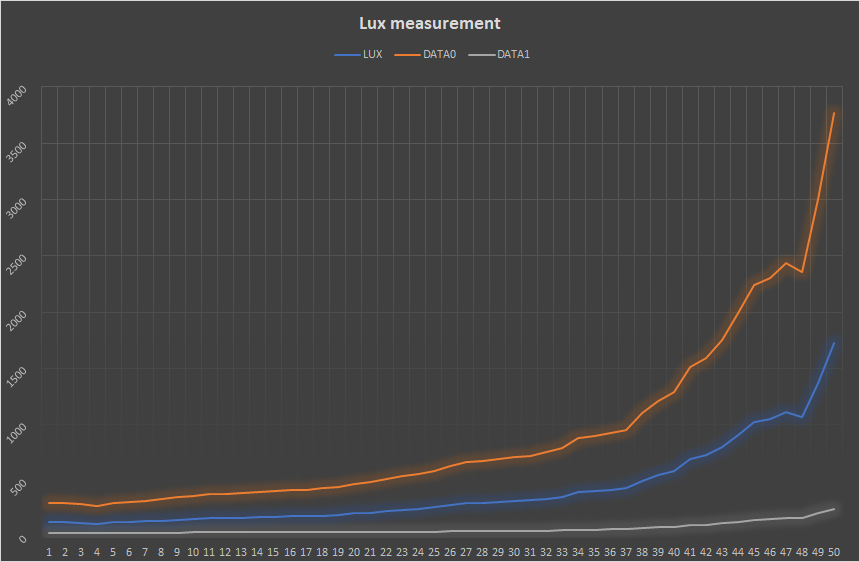 Also, in order to bring confidence to the experiment, a measurement with an MT-912 Lux Meter was performed and compared to the values obtained from the script. The results are shown in Figure 14 and Figure15, where Flora measured 77lux and the equipment measured 76,8 lux. 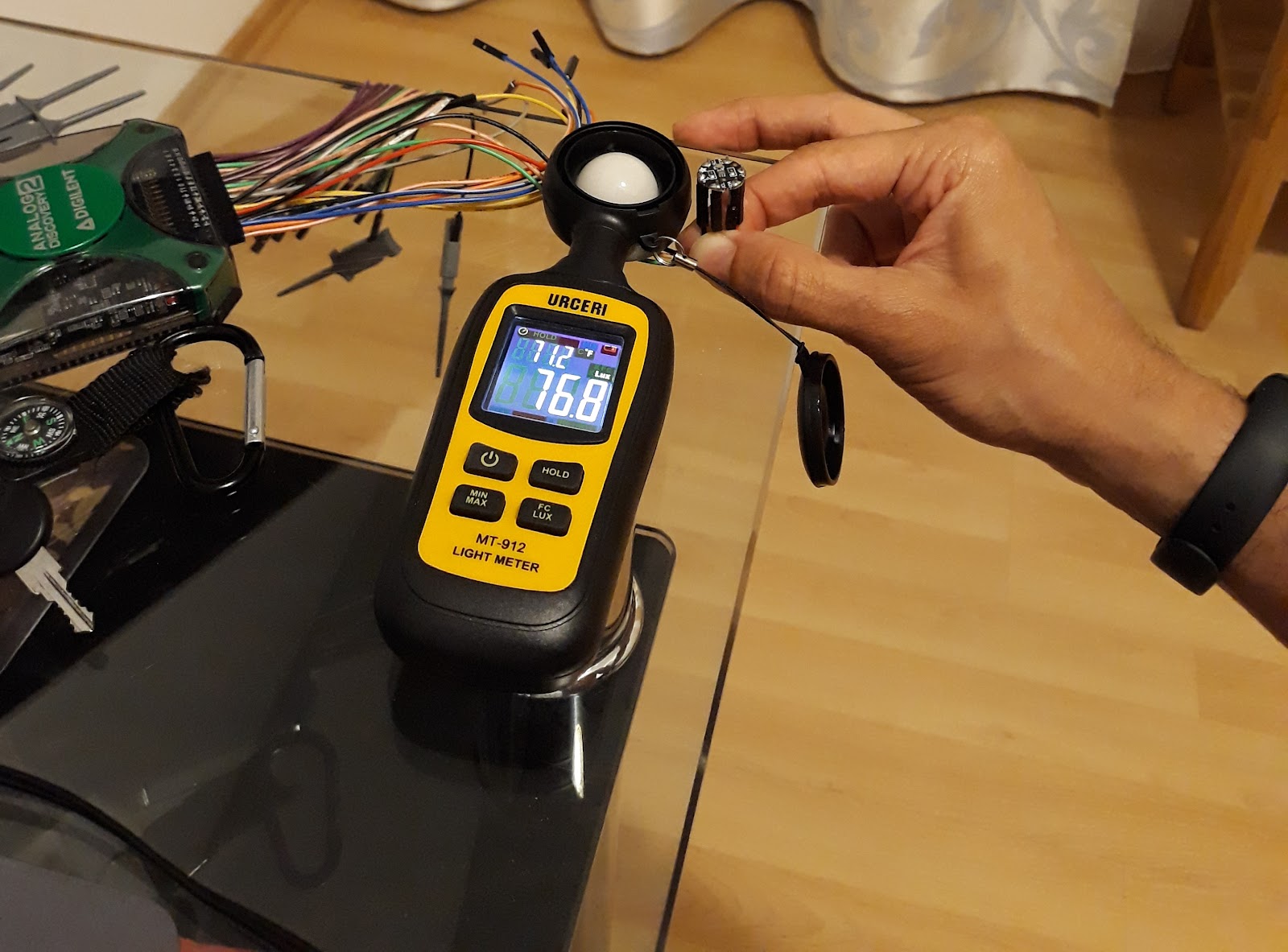 Finally, to obtain data about the light coming from the sun to my room, a setup was made as in Figure 16. The sensor was pointed to outside from close to the window. Then, data was recorded (Table 3 attached ) during about 26 hours and the graphic was plotted in Figure 17. 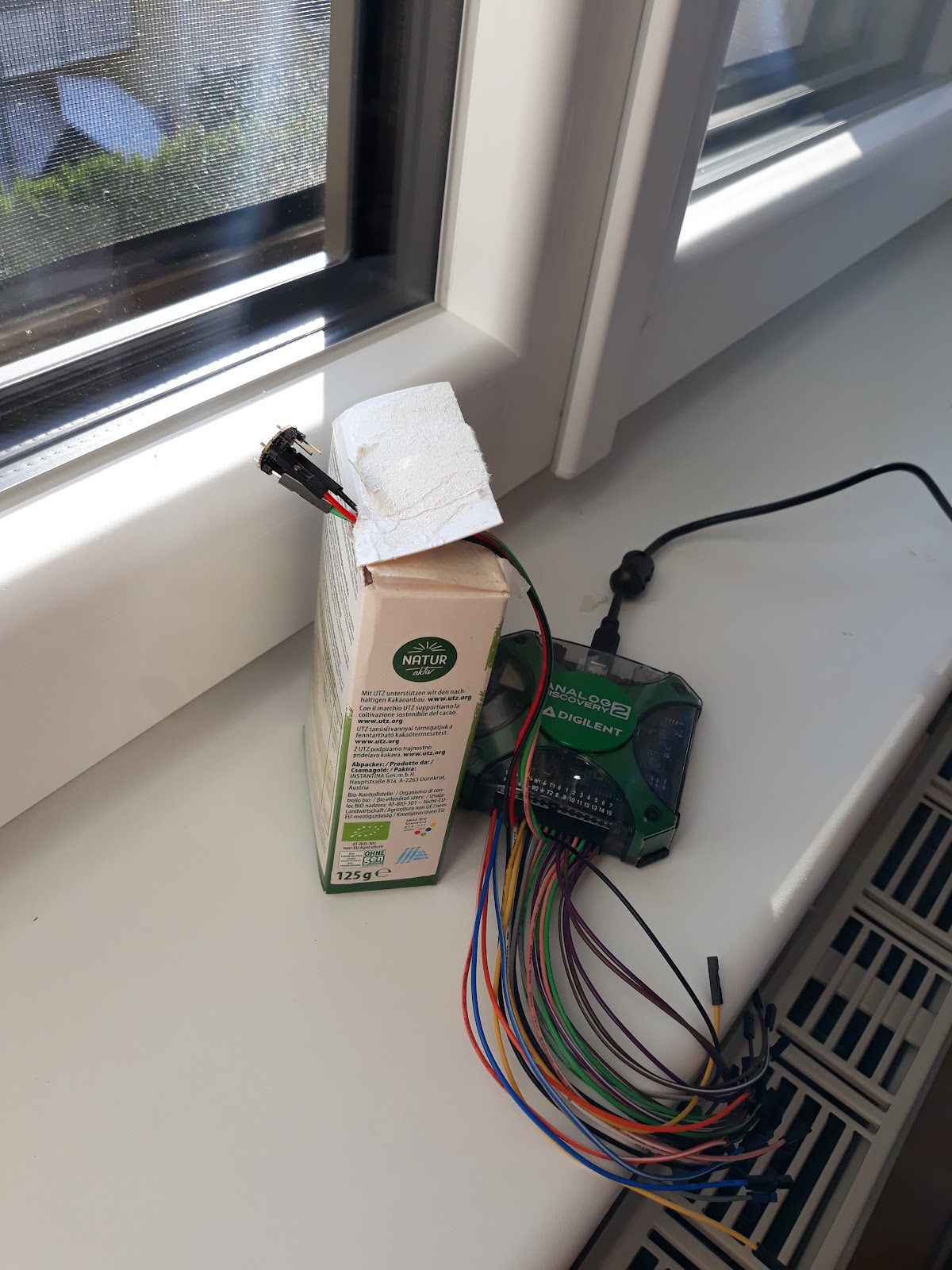 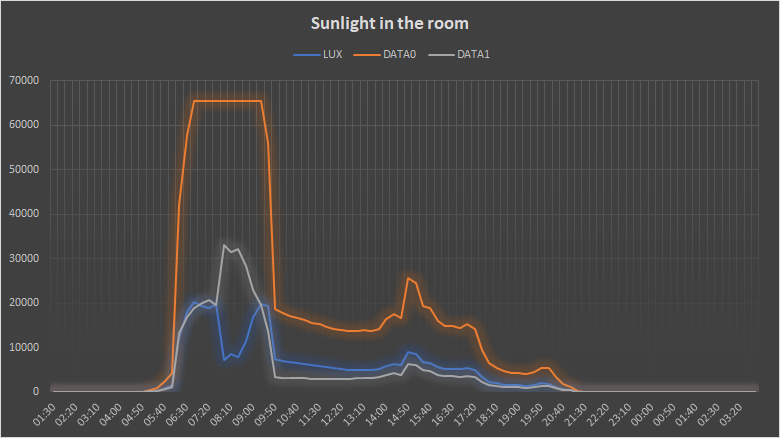 As expected, during the day the light is more intense and in the morning even more, because my windows take the sun rising. Also, around 6:40 am to 9:30 am the sunlight intensity in my room was high enough to saturate the sensor which is represented by the flat part in the orange curve in this interval. After that, the light level is lower which represents that my room is not having direct light from the sun maybe due to clouds, obstacles or even its position. At night from 9:30 pm, as it is supposed to happen, the light level tends to zero.

All goals for this project were successfully accomplished. The results obtained in the form of plots from the measurements look already intuitive for a first sight evaluation and this analysis was possible due to the possibility of exporting data easily with javascript. Also, the project proved that tsl2561 sensor is only suitable for indoor application due to its saturation point.

Considerations on the use of Waveforms

During the project execution, some features were missing or could be improved and some observations were found, then in this section they are described. 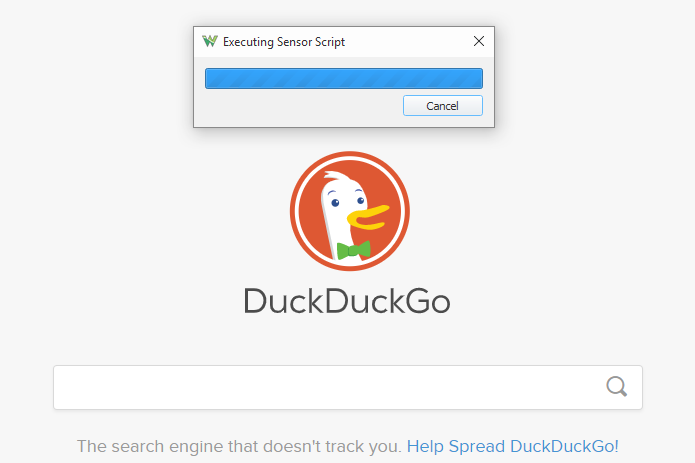 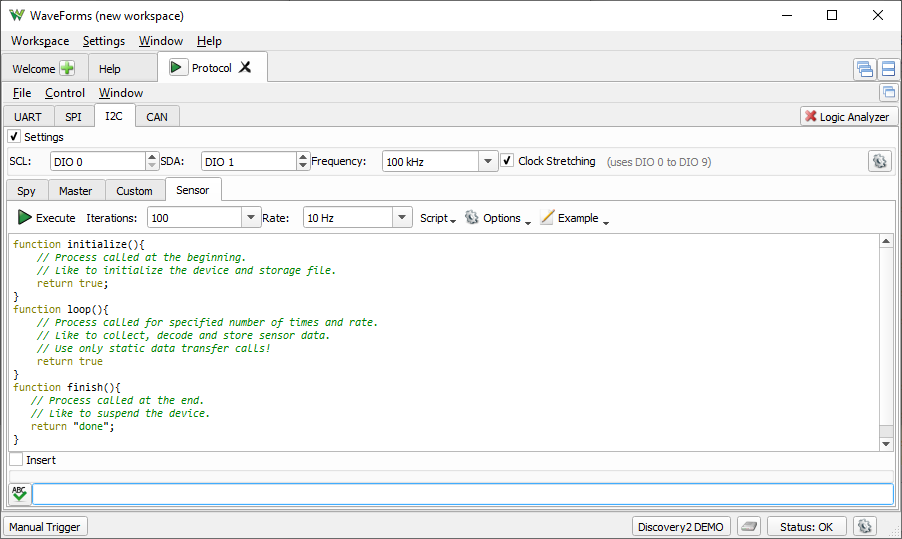