First off a picture of something cool I picked up on my trip for the Project.

You can see BlueDude getting ready to do some serious Surfing.  :-)

But the item I would like to draw your attention to is the Twenty Thousand Leagues Under The Seas.

A hollow book that hopefully will enclose Project Loki even with the 7" touchscreen!

Okay, when we last blogged we decided to look and see if there were any bluetooth tools installed with this version of Kali since I was not finding anything in the StickyPi menu system.

Reading through some webinfo pages hinted that Kali should have bluetooth tools under Wireless Attacks.

Here is an example from an interesting article on null-byte.wonderhowto.com. 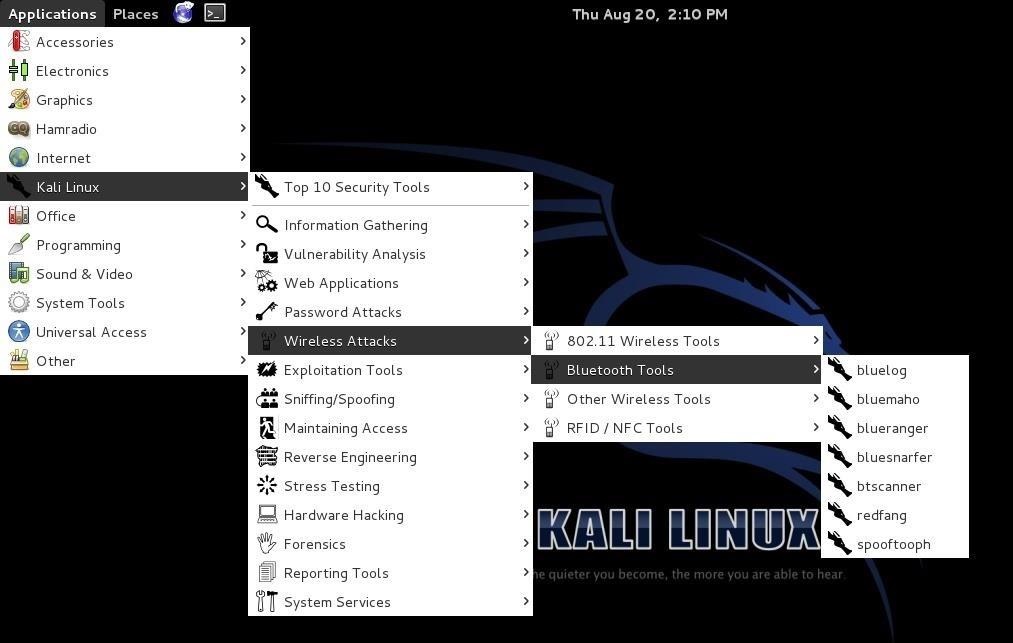 To see the full article please go here.  There are some other bluetooth articles there as well if you wander through.

It is a set of older articles though and as always with technology, the constant updates and upgrades can make some information historical but not accurate with current tools.

So let's see what Project Loki currently has.

Okay, as we can see our default load of applications does not seem to include any of the Bluetooth Tools.

Well that is not going to work for my project so let's see what needs to be done to add some tools.

We have Tools, Metapackages and Version Tracking.

Let's see what we can find under Tools.

Wow, that is a lot of tools!

Broken down into sections:

For a total of 370 tools listed.  To be fair some of these tools are listed in multiple sections since they can serve in multiple capabilities.

Still pretty impressive amount of options to play with.  But to save time I had read that the Metapackages had been updated to include a Wireless Tools package.

So let's take a look at the Metapackage options.

This sounds promising when you don't want to go through a large tool box of unknown tools!  From the website:

"Metapackages give you the flexibility to install specific subsets of tools based on your particular needs. For instance, if you are going to conduct a wireless security assessment, you can quickly create a custom Kali ISO and include the kali-linux-wireless metapackage to only install the tools you need."

In their example they even tell us of the Metapackage we are most likely looking for, kali-linux-wireless.  But to be sure let's see what they are covering.

kali-linux : The Base Kali Linux System

Each package has a drop down list that will display specifically what is in it.
Let's see what our kali-linux-wireless has:
That is a large assortment of tools, I am seeing a few of them that I have seen referenced for Bluetooth tools.  So let's go with this one!

If you are still here on the menu and haven't jumped over to X on TFT, you can use the Terminal button.  I actually had been looking at things through X on TFT to see what was default installed and so I stayed there and used the Terminal option from there.

Keep rolling with the install.  Glad I got the 32gig card!

Yes, yes it did take some time!  But finally we are Done!

So jumping back to check our Wireless Attacks and we see quite a bit more!