Net neutrality is a topic that many users of the Internet know little about. With the recent announcement by the FCC regarding their new drafted legislation “Open Internet Rules”, the topic has been on the minds of many involved with Internet regulation, including lobbyists and net neutrality advocates. The FCC has looked at this topic before; four years ago, they introduced the FCC Open Internet Order, which, in part, forced Internet Service Providers (ISPs) to provide access to content from their competitors, and also to high-bandwidth content such as Netflix. This ruling did not, however, prevent ISPs from charging more for faster access and more bandwidth.

This led to the FCC releasing a final copy of the 2010 Order, entitled “Preserving a Free and Open Internet”. Importantly, the FCC focused on keeping ISPs transparent in their management of Internet services – specifically ruling that they “… must not block lawful content, nor unreasonably discriminate in transmitting lawful network traffic.” This, of course, opens up the debate on the meaning of “unreasonably discriminate”.

Earlier this year, in a case called Verizon Communications v. Federal Communications Commission, the FCC was determined to have no authority to enforce the Open Internet Rules they

The comic at the top dates from 2006 but is still appropriate -- bandwidth limit could be restricted at will by the ISPs, and companies who pay ISPs for special access will get faster connection speeds and possibly even the removal of bandwidth limits. For example, YouTube could pay Comcast to make sure their website had the fastest 'lane' of traffic available. Also, Comcast users would be able to access YouTube without it counting towards their monthly bandwidth limit. Keep in mind this is a hypothetical -- but without net neutrality rules in place, there will be little to stop the cable companies from acting this way. An excellent resource to learn more about Net Neutrality and the “Open Internet” is http://www.theopeninter.net/ (an excellent URL!). Their front page defines the concept of net neutrality very well: created in 2010. This had resounding impacts as two of the important clauses in the Rules -- no blocking of legal content and no discrimination of network traffic -- were vacated entirely. In the few months since then, many of the large ISPs have been finding ways to take advantage of the FCCs limited authority. AT&T and Verizon have been accused of intentionally ‘shaping’ their network traffic, slowing access to bandwidth-heavy services like Netflix and Amazon’s Cloud Services. The companies deny these allegations, but it is activities like these that should have average Internet users like you and I concerned.

“Network neutrality is the idea that your cellular, cable, or phone Internet connection should treat all websites and services the same. Big companies like AT&T, Verizon, and Comcast want to treat them differently so they can charge you more depending on what you use.

The Federal Communications Commission (FCC) is currently debating legislation to define limits for Internet service providers (ISPs). The hope is that they will keep the Internet open and prevent companies from discriminating against different kinds of websites and services.”

This highlights the importance of voicing your opinion. It is almost certain that we will see changes; what is not certain is how these changes will affect our lives. The important thing to think about is how you use the Internet in your daily life. What is it that you value about access to the Internet? Do you use it for entertainment, research, or just social media? All Internet usage is on the rise, and no one government or authority can control the Internet as a whole. And as the Internet is so pervasive in our daily lives, we should care about what happens to it. China has been censoring their citizens’ Internet access for years. Anything related to Tiananmen Square protests (known as the June Fourth Incident in China) and subsequent massacre is blocked. Some see this as an extreme example, but left unchecked ISPs will do whatever makes them the most money. 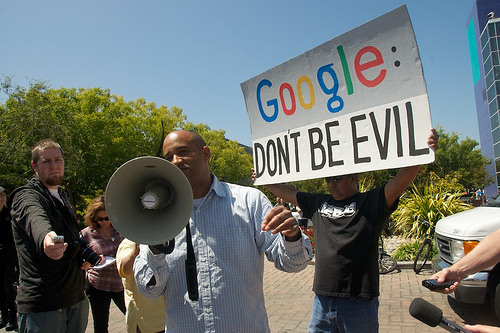 So what does this all mean for us? Well, the debate has been going on for as long as the Internet has been around. Changes can come quickly, as opposed to other mediums such as television or radio, where sweeping changes took years to implement. Though changes to content might take a while, ISPs have the power to block, censor or shape their network traffic. As explained on the Open Internet website, ISPs have a financial motive to do this, and this is why consumers need to be aware of the concept of net neutrality.

One of the issues at the forefront is whether or not ISPs have the authority to artificially create  'fast-lane' and 'slow-lane' types of connections. The ISPs have argued that they would, in fact, create 'fast-lane' and 'hyper-fast-lane' variants for more money, but these arguments have been met with skepticism -- as noted in the John Oliver video below, Comcast recently decreased their connection speeds to Netflix in order to get themselves a better deal -- they wanted Netflix to pay them for faster network speeds for Comcast subscribers. During the negotiations, Comcast's service

speeds to Netflix took a dramatic drop -- and were immediately reversed upon signing the agreement.

Even more concerning is smaller companies such as start-ups would be at a huge disadvantage online -- larger companies with deep pockets would ensure they get the best connections, leaving new companies little room to breathe. Google and Netflix are both in a position to benefit, but both have in the past spoken in favor of net neutrality. With the new rule changes, however, it is unclear if they will continue to support the idea.

The new, re-drafted “Open Internet Rules” are summed up by Tom Wheeler, chairman of the FCC, in a recent blog post on the FCC website:

“To be clear, this is what the Notice will propose:

In response to the FCC’s comments on the issue, net neutrality activists protested outside FCC headquarters for over a week, drawing comparisons to the Occupy protests.

More importantly – the Chairman of the FCC, Tom Wheeler (left), was recently compared to a dingo by comedian John Oliver. His hilarious segment after the initial announcement was followed up by his viewers crashing the FCC website on June 2nd, after he encouraged Internet commenters to “channel [their] anger, that badly spelled bile that [they] normally reserve for unforgivable attacks on actresses you seem to think have put on weight… Seize your moment, my lovely trolls. Turn on caps lock and fly my pretties, fly! Fly! Fly!"

The entire segment can be viewed on YouTube here.

We all value the Internet -- as John Oliver pointed out, the FCC is inviting comment on their website. I would encourage you to voice your opinion – the Internet is such a large part of our daily lives that if limits were placed on the content we access, the value we get from being connected would be greatly diminished. An encouraging sign is that the FCC is accepting input from the public on the proposed legislation, and so far at least 47 000 people have commented, more than any other topic on the FCC website. The email is openInternet@fcc.gov – just remember that sending comments to that email counts as filing a document into an official FCC proceeding. This is usually a good thing – there is record of all comments entered. However, your name and your full statement will be available on the web. The FCC also offers a page called the “Open Internet Explainer”, available here. It contains links to a lot more information.