Are the Next-Gen Consoles Coming Too Late?

Microsoft and Sony really want you to wait a while before playing their next generation systems. They want you to sit tight.

Before launching anything new, they want to hold off until the last possible moment. They want to skip out of the tottering, crumbling edifice of the current generation just before it comes crashing to the ground.

Their anxiety about making the move is so great that they are prepared to allow Wii U a free run at the market for at least year, and they are even happy to wave each other through as first-to-market.

Disappointingly, there has been none of the mind-games or competition on launch timing that we've come to expect (and enjoy) from hardware warfare. There is no sense of an arms race -- of two mighty rivals manfully striving to beat each other to the punch.

The reason is simple. The current generation is finally making money and declining at a seemingly manageable rate, adding much-needed loot to Sony and Microsoft’s coffers. In contrast, the next generation will cost a great deal of money and will continue to do so for years. And with both technology and consumer behavior changing fast, launching games consoles has never been riskier. In short, Sony and Microsoft have too much to lose by rushing to market, while Nintendo has nothing to gain by waiting.

Microsoft and Sony are seeing returns on their huge investments of the last decade. Game sales are declining but the businesses are largely predictable and clustered around big, profitable franchises. Also, they have finally reached a critical mass of online subscribers who are willing to buy highly profitable digital-only games. This is a situation both firms have invested heavily in achieving. They are not about to screw it all up by rendering their lead products obsolete.

As Microsoft’s Phil Spencer told me at E3, ”Our business is really in a sweet spot if you think about the installed base and the number of people -- the addressable audience -- of a platform like Xbox 360 right now. So as somebody who's running a publisher, a first-party publisher, but still, an entertainment publisher, it's a great time to be on Xbox. We've got tens of millions of people out there, so when we put out something like Minecraft, we sold two million units. That's a great business.”

And Sony Computer Entertainment America boss Jack Tretton is equally good at spinning positive on the company’s reluctance to move forward. He told Gametrailers, “We have never been first [to launch], we have never been cheapest, it is about being the best. If you can build a better machine and it is going to come out a little bit later, that is better than rushing something to market that is going to run out of gas in the long term." 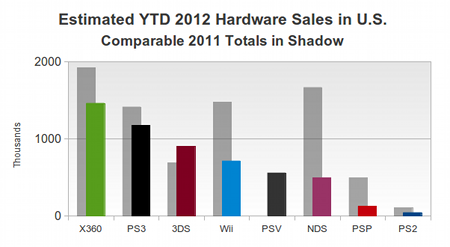 It’s interesting that the third-party publishers are in no rush for their first-party cousins to make the leap. Given that their sales are declining, you might expect some sort of call-to-action. Not so. One leading exec told me that he is “delighted” that neither Sony nor Microsoft had anything to say about new hardware at E3. The publishers do not want you saving up to buy a new console next year, based on fancy promises and lush previews. They want you buying their current-gen AAA games this year. They don't want you thinking that there's something better around the corner. They want you to be happy with your lot.

Of course, they are seeing serious declines in games retail sales in 2012, but they still don’t want the market to do anything rash, like introduce exciting new products. Because that would trigger an expensive third-party arms race of polishing and marketing all that new IP they’ve all been secretly working on. For now, the game companies would rather manage the gentle stroll of decline than face the extreme challenge of a new generation.

But this conservatism is risky. Downward trends have a habit of seeming predictable right up to the point when they are not. If Malcolm Gladwell is to be believed, it’s the trend-setters, the most knowledgeable consumers, who make the difference, who change behavior so sharply that it precipitates calamitous consequences. In other words, people like you make all the difference.

The gaming industry relies very heavily on trend-setters, just the sort of gamers who are most impatient for new hardware, and most likely to set buying trends for games on old hardware. The whole strategy relies on you continuing to be excited about the current generation, and continuing to influence the mass market by your enthusiasm. And sure, there are lots of things to like about the games coming out on PlayStation 3 and Xbox 360. But should that excitement wane, the consequences are dire. The big games season of 2012 looks dandy, but 2013? Maybe that's a year too far.

Right now the business is relying on the millions of people who’ll go out and buy the new Call of Duty. But the people who really matter are the first million who bought the original Call of Duty and put the whole thing in motion. And, by the end of 2013, these guys will have been playing the same console for an unprecedented seven years (PS3) or eight (Xbox 360) without a new generational introduction.

Let’s just come out and say it. The current generation is old.

Meanwhile sales of retail games are dropping, fast. Earlier this month, in his excellent regular column for Gamasutra, statistics-analyst Matt Matthews made this startling observation:

“In each of 2008, 2009, and 2010 the 50 million annual unit software point was crossed sometime in March. But in 2011, it fell back into early April, indicating a significant slowdown. This year, unit sales just crossed 51 million units at the very end of May.”