Our biosensor team is honored to be selected a finalist and humbled to be in the company of fellow finalists, Hackerspace Charlotte's Feltronics & BuildBrighton's Phonicubes.

I had a total "WOW!" moment when I realized, while watching the Feltronics video, that the circuit on the white board was a radio transmitter!  I think Feltronics will be a big help to electronics instruction everywhere including at hackerspaces.  And how can one not love a giant felt multimeter!

Phonicubes is both adorable and innovative.  I really appreciated how they integrated different technologies into one smoothly operating device.  I think it will serve children learning to read very well and would love to see a kit or even retail version produced.

Beyond the finalists, I had my eye on the Big Board project by the Hack Factory team in Minneapolis from the start.  A 10x breadboard and working components is just so darn cool!  I can't wait to pick up a giant LED and stick it into a breadboard someday.

The OpenLab by the Melbourne Hackerspace "down under" really impressed me with their professional design & top-notch documentation.  Having used an awful, proprietary classroom lab system in the past, I think OpenLab fills a big need for electronics education.  Also, I think their "Team moment of the week" posts on element14 really exemplified what the Challenge was all about: coming together as a team to solve problems and build cool stuff for eduction!

Another project that amazed me was the TileBot from Artisans' Asylum in Boston.  It's like a 21st century version of the classic LOGO and its turtle!  I think their simple-to-use, yet open-ended system will lead to endless learning & fun for children.

Workshop 88, our hackerspace neighbors just a few miles West of Chicago, built the incredibly reconfigurable Educubes.  These IR networked, touch-sensitive blocks can help kids practice math on the fly or just about anything else that be dreamed up in the software.

Also, I can't say enough how much the Workshop 88 folks embody the true essence of the hackerspace community.  Our biosensor team decided late in the game that we wanted to add a local display, but the best option was the sold-out Adafruit 2.8" TFT LCD.  We emailed Workshop 88, and they offered to give us an extra LCD.  When the spare proved faulty, they even offered to sacrifice one of their Educubes and give us a LCD known to be working.  I can't overstate how gracious they were.  Although being relatively close to each other, our two spaces have not had that much interaction previously, but I think now, prompted by the competition, we are getting to know each other better! 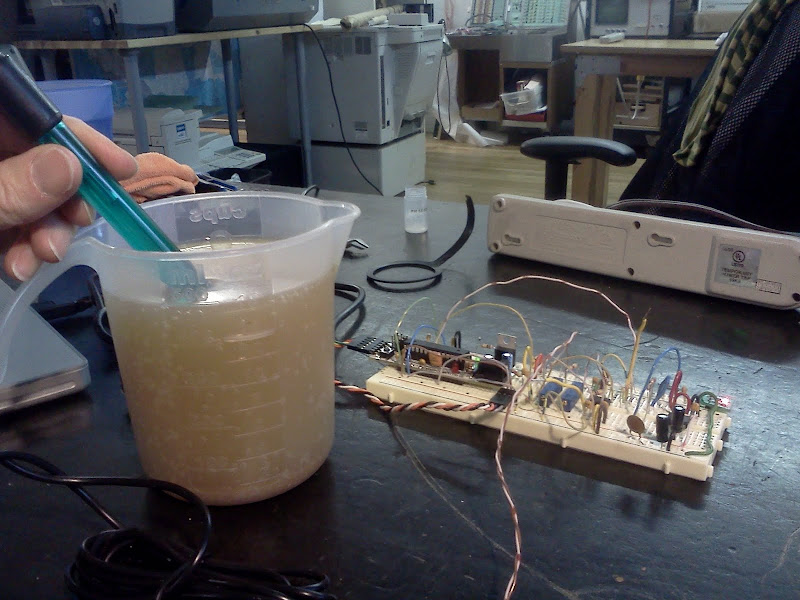 Finally, I'd like to highlight a kindred DIY biology project in the challenge: the BioBoard by Noisebridge in San Francisco.  They developed an amazing set of sensors like pH & dissolved oxygen along with a fantastic web interface with a database backend.  Their system can be used by students to investigate biological processes like fermentation.  In true spirit of the hackerspace movement, I hope that our two teams will collaborate in the future to make a most excellent DIY biology platform for students to use.

On behalf of the entire Pumping Station: One Biosensor Array Team, I'd like congratulate all our fellow teams in this challenge.  There may be only 3 teams selected as finalists, but, as Mitch wrote, all the teams are truly winners.  I have no doubt the hard work that was poured into each project will provide great benefit to anyone who seeks to learn & discover our wonderful world for years to come!