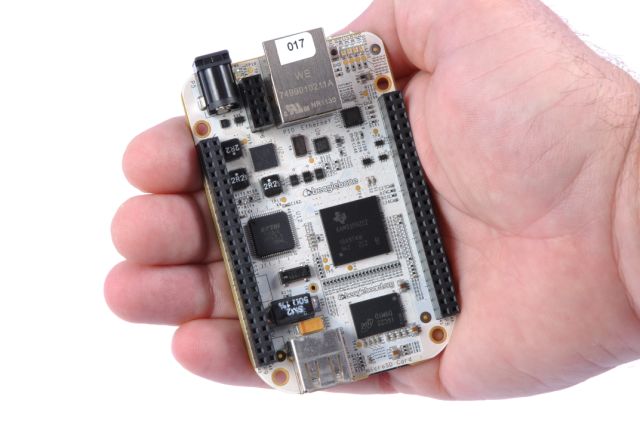 What is the BeagleBoneBeagleBone capable of doing?

At over 1.5 billion Dhrystone operations per second and vector floating point arithmetic operations, the BeagleBoneBeagleBone is capable of not just interfacing to all of your robotics motor drivers, location or pressure sensors and 2D or 3D cameras, but also running OpenCV, OpenNI and other image collection and analysis software to recognize the objects around your robot and the gestures you might make to control it. Through HDMI, VGA or LCD expansion boards, it is capable of decoding and displaying mutliple video formats utilizing a completely open source software stack and synchronizing playback over Ethernet or USB with other BeagleBoards to create massive video walls.  If what you are into is building 3D printers, then the BeagleBone has the extensive PWM capabilities, the on-chip Ethernet and the 3D rendering and manipulation capabilities all help you eliminate both your underpowered microcontroller-based controller board as well as that PC from your basement. learn more here http://beagleboard.org/bone

How does Linux make the BeagleBone easier to use than a microcontroller-based platform?

The advantage of full-featured Linux is the Linux community.  While the template-based coding of systems like the Arduino make it easy to copy-and-paste simple projects and a limited number of more complex libraries that don't have a lot of interaction, 20 years of Linux development have generated an extensive set of highly interoperable software that can be utilized and collaborated upon, without sacrificing the simplicity of doing something like toggling an LED or switch or reading an analog or I2C-based sensor.

The first example I have is node.js, the server-side JavaScript language interpreter with a rapidly growing community.  The evented I/O model enables both building highly scalable web servers and being responsive to the many sensors within your embedded system.  As part of the shipping image with the BeagleBone, we are looking to provide the git-enabled Cloud9 IDE that allows you to edit node.js applications directly over your web browser by simply pointing it to the BeagleBone. While this technology will be in a highly-alpha quality state intended to communicate the possibilities for making a quantum jump in rapid prototyping with Linux when the BeagleBone is initially launched, we intend to collaborate with the Linux, Cloud9 IDE (Ajax.org), node.js, github.com and BeagleBoard communities to evolve this to Arduino-like simplicity, without the need to install any development tools or understand Linux programming details.  Development of the application library will be done entirely in the open and is awaiting launch until there is broad availability of the hardware to avoid any undue refactoring that might come from not having the proper collaboration and review. read more here... http://beagleboard.org/bone

Is there a road-map for peripheral boards? "capes"

DVI-D, VGA, LCD, motorcontrol, prototyping, battery and more boards are available now.  Plans for a Wi-Fi+Battery board are still in the very preliminary phases.  We've engaged several open hardware developers for sensor and other interesting peripheral boards, but no hard commitments for a roadmap yet.  We are in the very early life of the BeagleBone and I expect to see more available "sheilds", "capes", "peripheral boards" or whatever you want to call them than you can count!  Take a look at the list of registered cape concepts and register your own. You can purchase some of the capes via the CircuitCo BeagleBone Cape wiki page which attempts to log all of the capes currently available for sale.

If I want to make a "cape", is there a starting point?

A community member has already started creating a starting reference in Eagle.  More on that to come.

A "cape" is a BeagleBone daughterboard.  We'll generally refer to them as "capes" because "Underdog" is a beagle and he wears a cape.  The term "shields" is nice, but that has some implication of Arduino and this is definitely not an Arduino clone.  Take a look at the list of registered cape concepts and register your own. You can purchase some of the capes via the CircuitCo BeagleBone Cape wiki page which attempts to log all of the capes currently available for sale.

What is the processor used on the board?

The BeagleBone uses a TI AM3358 ARM Cortex-A8-based microprocessor. Announced on Oct 31, 2011, the main processor is available for as little as $5, uses a 0.8mm ball-grid array and standard DDR2 memory, making this board easier to clone than other BeagleBoard designs.

Where do I find out about the AM3358/9 device used on the BeagleBone?

Customers can order the microprocessor XAM3358ZCE or XAM3359ZCZ with TI's standard lead time.