What were the biggest problems encountered?: null

I would like to thank Element14 for the opportunity to test this LaunchPad and Boosterpack and get the chance to see what they are capable of. I am still in the progress of getting to know and work with this kit but as I am not having the easiest of times I thought I would document what I have and update as I progress. I have outlined what it is I would like to cover, so please do not point out missing text as of yet as I am still in the middle of this review

As I have worked with a few Texas Instruments kits before I was hoping this would be an easy and fun kit to play with, but it appears this kit is still somewhat in motion (no pun intended). I will outline why I feel this way as I progress.

The un-boxing of this product was somewhat disappointing. Being a Texas Instruments product I was hoping it would be the high quality and form factor of other LaunchPads and Boosterpacks. Unfortunately the Launchpad is in an old style box making it bigger and bulkier than I would like making it harder to store. As for the booster it can clearly be seen in the picture below that packaging was not at all well thought about. The box is many times larger than the Boosterpack and just an unwieldy shape. 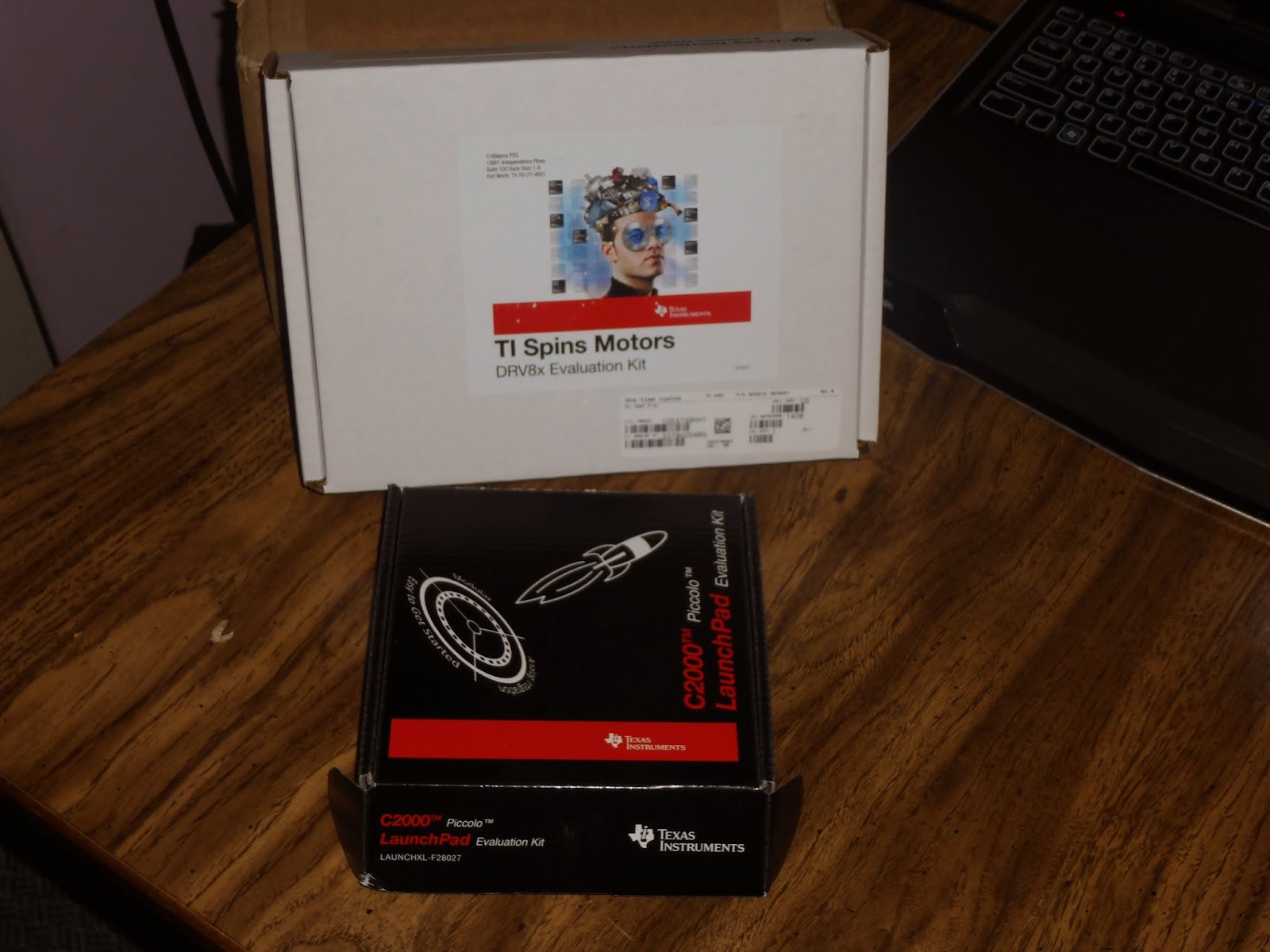 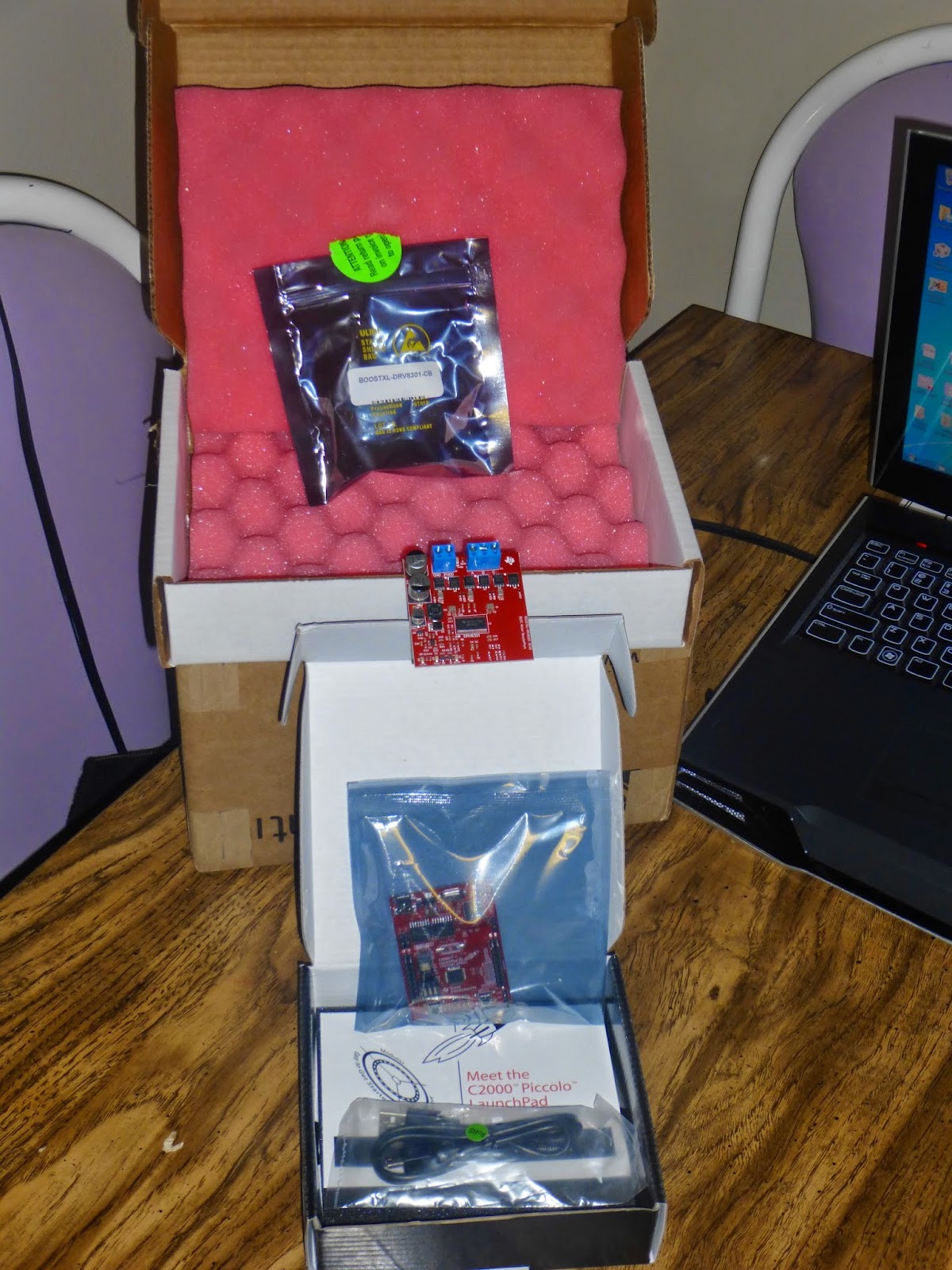 On the upside everything needed to get started is included in the box. It has been mentioned that a BLDC motor would have been a nice but as these are easy enough to come by today (computer fans, etc.) I will not hold this against Texas Instruments, would it be nice to include a motor, yes, can it be held against them for not including one, no. There are other more pressing issues I would correct before including a motor, these will be outlined as I go.

Opening the kit and and having a first look at the board you see the usual red well thought out and designed PCB that is standard for Texas Instruments. All the major components and sections on the Launchpad were well labeled and easy to read. The quick start guide has easy to follow steps to get you up and running pretty quickly. The kit comes with a USB cable so there is no need to go searching for one to get the basics up and running.

Out of the Box Demo

Once plugged in the there are two simple demos available to run. The first demo is a variation of the standard blinkey. In this case there is a nibble of LEDs and these flash in increasing order, moving from left to right. The second demo is slightly more complex. This demo reads the cores temperature and uses that as a reference for future readings. Based on this value other LEDs will light to indicate how many degrees above or below the reference value the current reading is. if LED 3 is lit then the core is at the reference temperature any additional LED indicates an increase in temperature in binary. Therefore if the reference is 30 ℃ and the temperature goes to 33 ℃ then the LEDs would be 1011, but if the temperature would be 28 ℃ then the LEDs would be 0010.

Figure 2. LEDs Indicating the Increase in Temperature Above the Reference Value

Beyond these basic demos, you can also open a putty terminal or some other terminal for a more informative result. After resetting the board the terminal will display the Texas Instruments logo. If this is done in putty instead of some other terminals available you will see this in color. After pressing S3 the temperature demo comes up and the current temperature is displayed. This is done as a temperature in Celsius and a breakdown of reference with the addition or subtraction of some offset 30 Celsius = Ref + 1). 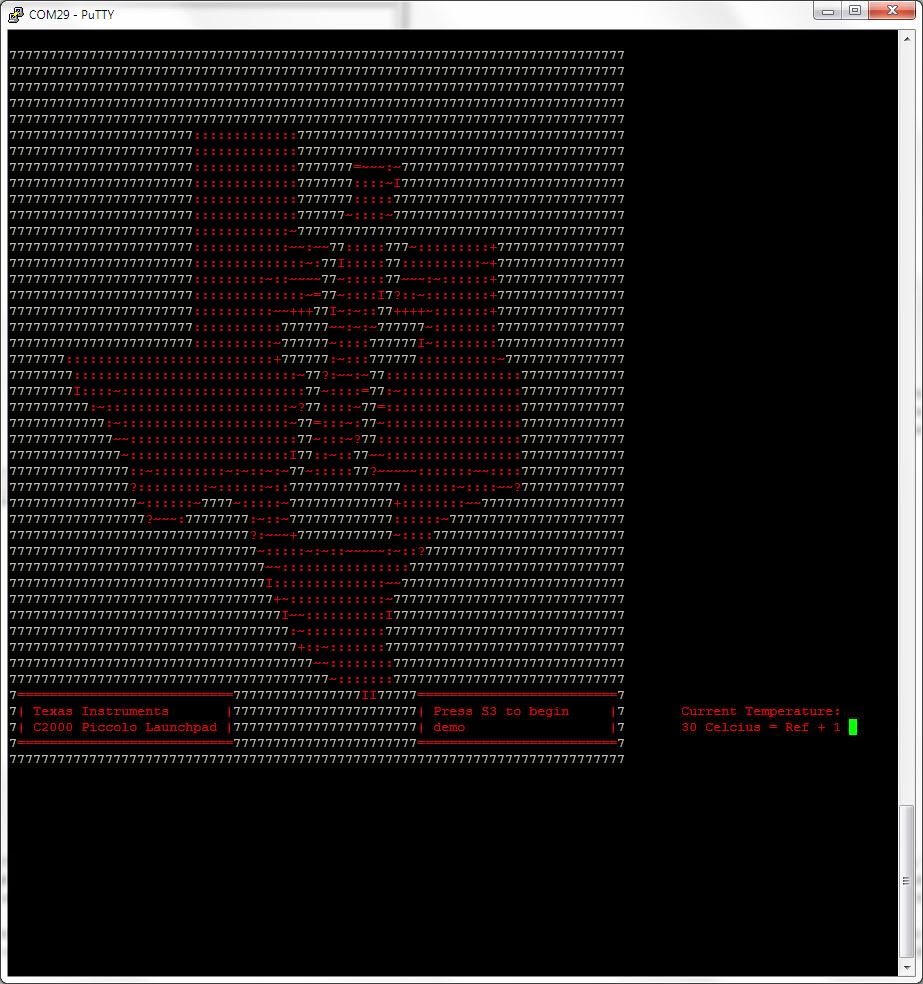 Board gets pretty warm, and this appears to be coming from the onboard FTDI IC. As I do not have a thermal camera my fingers and upper lip are what we're used to narrow down the what was the warm component.