What other parts do you consider comparable to this product?: Arduino Nano, Uno, Micro and other microcontroller development boards

What were the biggest problems encountered?: Actually I planned to use ROS2 in Ubuntu machine and Micro-ROS2 on Pico. But Facing incompatibility with versions.

First of all I wanna thank Element14 for giving the oppourtunity to test this Raspberry Pi Pico Board. And also thanks for the patience. Since I'm not not able to submit the review before the mentioned deadline. Actually I got stucked in a technical issue. Thats the reason. However I managed to resolve the issue and completed the review. I tested this board by implementing it on

The Pico arrived in a small packet without headers. If the headers were provided additionally, It will be useful for implementing in applications. However, I already have header pins, so just soldered it with the Pico and started testing the board.

After soldering the Raspberry Pi Pico, I started programming the board using Arduino IDE.

Since I tested in Ubuntu OS, I'm giving the instructions for setting up the IDE in Linux.

1. Open a terminal and use wget to download the official Pico setup script.

2. In the same terminal modify the downloaded file so that it is executable.

3. Run pico_setup.sh to start the installation process. Enter your sudo password if prompted.

4. Download the Arduino IDE and install it to your machine.

5. Open a terminal and add your user to the group “dialout.” This group can communicate with devices such as the Arduino. Using “$USER” will automatically use your username.

6. Log out or reboot your computer for the changes to take effect.

7. Open the Arduino application and go to File >> Preferences.

8. In the additional boards manager add this line and click OK.

10. Type “pico” in the search box and then install the Raspberry Pi Pico / RP2040 board. This will trigger another large download, approximately 300MB in size.

13. Run a command to locate the USB device which identifies as a Raspberry Pi Pico. In our case it was ttyACM0. 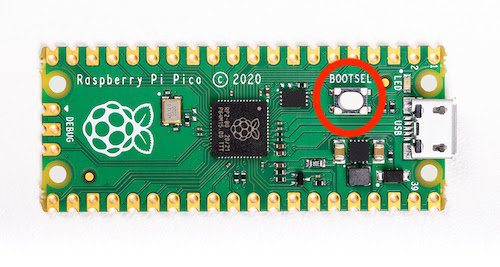 Raspberry Pi Pico has a BOOTSEL mode for programming firmware over the USB port. Holding the BOOTSEL button when powering up your board will put it into a special mode where it appears as a USB Mass Storage Device. 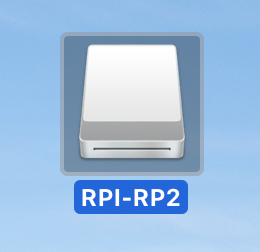 Drag and drop the downloaded firmware file into this disk drive,  As soon as the file transfers, the drive will disappear and the device will reboot itself.

Create and activate a Python virtual environment. If you are using a Mac or Linux computer, do it as follows:

Make sure that the Python virtual environment is activated by checking that your command prompt was modified to include a (venv) prefix.

Next install the rshell tool in your virtual environment:

Make sure the Pico is still connected to your computer with the USB cable (you will not see a disk drive now), and then execute the following command to connect to it from your computer:

Make sure to replace <your-pico-serial-device> with the serial device name assigned to your Pico in the command above. In my case it is /dev/ttyACM0.

Enter the MicroPython REPL and then type the following Python commands to turn the LED on:

As an example, let’s build a short application that blinks the onboard LED five times. Here is the code, which you can copy into a new file on your computer named led_blink.py:

Now enter into the rshell prompt:

Then in the rshell prompt use the cp command to copy the file to the Pico board:

Actually I planned to conduct the testing in a different way but due to some issues with ROS2 and gcc compiler, I'm not able to proceed it in that way. However working on it and will be updated here soon ! I wanna thank element14 for this oppourtunity and thank you all for your patience.