What other parts do you consider comparable to this product?: Raspberry pi, Arudino Uno, Various other micro-controllers.

What were the biggest problems encountered?: None, It was Excellent!

I got the opportunity to mess around with the BeagleBone Black Industrial. This was my first time using a BeagleBone product so my review will be based more around the new-comer to the BeagleBone family of products.

To Start of with:

First getting the Box and un-boxing it everything that you would need for it came with it. It was the BeagleBone and a Mini-USB (Not micro). Everything that came in the box can be seen below! 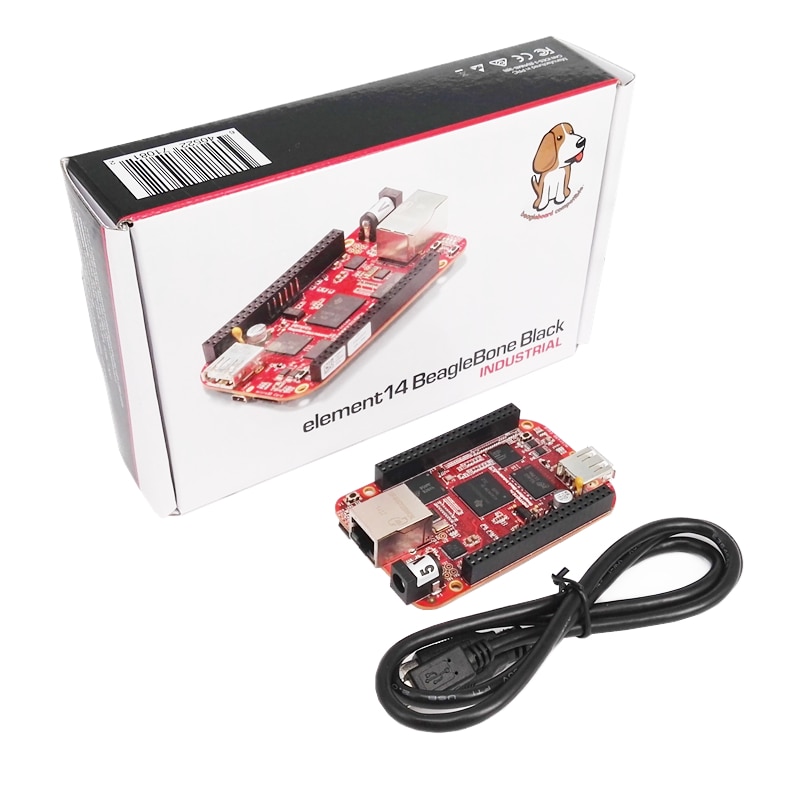 Setting up drivers and getting started with Cloud9 IDE:

For me i was using a Apple Macintosh,  and there was two drivers to install to get it to work correctly, after installing them it was a simple reboot and i was able to get into the Cloud9 IDE (cloud based development environment) through Safari and as simple as that it was connected to my BeagleBone Black. So to start of with i followed the BeagleBoard.org step by step guide to first get everything set up and ready to use the beaglebone. Which i have to say was extremely nice and easy to use. From my experience of working with Raspberry pi & Arudino i did absolutely love the fact that it came preinstalled with Debian Linux on there and all i had to do was install those two drivers to be ready to use. This is why i believe for a first time user it could be extremely nice to have everything set up for you and ready to get to programming. Now moving onto the Cloud9 development, It was my first time using a cloud based development environment and to get started with it was so nice, they had great documentations of predefined functions and everything to use and within 30 minutes of taking it out of the box i was able to write my first code for the beaglebone. I created a simple code that would toggle a LED on and off for 10 seconds. For a first time user of a product not fulling understanding the architecture of the beaglebone i found it extremely easy to be able to define the GPIO pins for the purpose i wanted to use them for

My code for Blinking LED:

After getting the LED to successful toggle between on and off i eventually moved on to programming the beaglebone to control a small motor using PWM. For a future project i was thinking of creating a a small drone and this was the test on how straight forward it would be for me to be able to control motors with the beaglebone. This was rather straight forward so i wont bore you with the detail so much! I Now im working on interfacing this with a SPI tft screen that i hope i could use to have a GUI for the drone i will build with the drone.

I know this review was rather short and to the point i feel like it discusses my main ideas of the beaglebone. I had a great first time expierence with this Roadtest and i feel like for anyone who needs more power and GPIO pins then a arudnio this would be a perfect replacement, I really liked how it was such a great intermediate step between a small microcontroller and a full faced FPGA. This was a great product and i feel like people who want to get more serious with programming microcontrollers that dont want to shell out the money for a FPGA. This is something i really look forward on having a part on my youtube channel where i will upload further builds with this specific BeagleBone and a future BeagleBones that i will purchase! I will still continue to give further updates on this product as i go along!!

Please see the video of me reviewing this product!!! If you guys get a chance subscribe because i will have future projects that will use this specific BeagleBone!