Ireland, like much of the EU, is in lockdown and I now find myself locked out from using my Windows-10 laptop, which I need to use to complete my AVNET Guardian-100 MT3620 roadtest review. Yep, the wife and kids have commandeered the laptop for school work, Zoom video virtual meetups, "Microsoft teams" meetings and last but not least online games.

So, I'm left using my trusty old 32-bit Windows desktop in the “man den”, which is perfectly good for Arduino but not much else these days. So, I decided to tackle something I had put aside for years as I knew I could then use the project to test out a user interface on the Guardian-100 when I got the chance. This was not something I had preplanned to do but when needs must, why not as never say no to a learning opportunity. 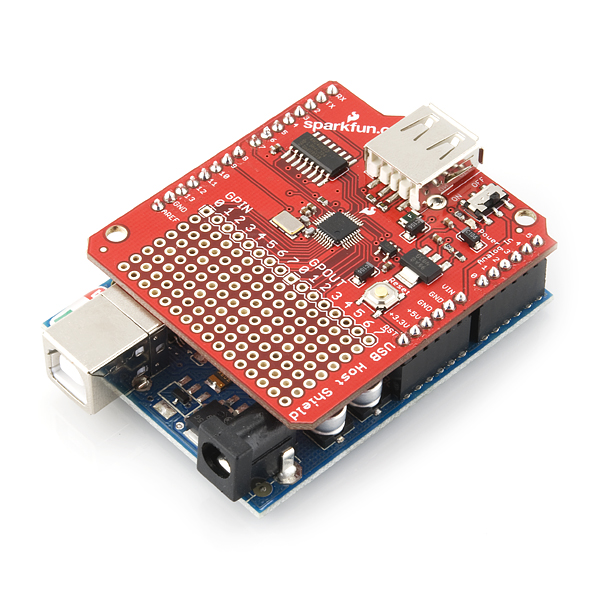 As it was Arduino Day 2020 on March 21st, I decided to dust off an Arduino USB Host Shield from Sparkfun to see if I could get it to communicate with a FTDI USB to UART converter.

I quickly realised why I had put this aside all those years ago. There are not many helpful tutorials about and the Arduino USB Host library requires a good bit of knowledge about USB drivers before you can get anywhere. I also found that most tutorials and the library were tailored mainly to towards using game controllers and USB peripherals like a keyboard or a mouse. I could not find much on how to send data between two microcontrollers using USB for serial communication. For those wanting to understand the basics of the Universal Serial Bus, I found this article on ElectronicDesign.com quite useful.

To be honest, I've been rather surprised that this is not a common setup for MCU's like it is with SBC's (maybe it is and I'm not aware of it) as there are some interesting use cases to use USB for bi-directional data communication. I could certainly see use cases for cellular or LoRa communication more so than WiFi but the basis for application is the same, namely, when you may want to measure something but the area where you are sensing might not be suitable for wireless communication. As such you would need to place the antenna (a more common scenario) or the wireless controller in a place where it can communicate. For example, sensing something below ground like a cellar.

This time I had the time available and I had a problem to solve, i.e. I wanted to replicate a “brownfield” use-case scenario that could be used with the USB port on the Guardian 100. So, I crafted up the following top-level design:

Thankfully, the Guardian-100 uses an FTDI USB to UART controller and the Arduino USB Host library provides an example for the FTDI USB driver. A big tick then for the choice of component used on the Guardian-100 as there are many other USB chips out there that do not have ready made open source libraries, or it's more difficult to find the right information.

My “brownfield” USB Host application is based off an Arduino UNO microcontroller. The application's functionality is as follows:

I found that with developing USB Host application, it is quite straightforward when you know how. The big "gotcha" with using the USB Host shield is that you need to use an external power supply with the Arduino UNO and you need to connect D7 to the Arduino Reset pin for the USB Host library to function properly. I wasted a good few days struggling to get the USB Host shield to work when my Arduino UNO was just powered by the USB cable attached to my computer. The requirement to use a separate power supply is buried in the detail - I found this tip in one of the comments on the Sparkfun website product page and then subsequently on blog somewhere.

The USB Host library I used can be found on GitHub: https://github.com/felis/USB_Host_Shield_2.0

Another convenient way to install this library on your Arduino IDE is to use Library Manager:

Once the library is downloaded you are presented with quite a few examples. The examples provided can be split into a number of categories, namely:

I found that debugging / fault finding is quite tricky, especially when you have not powered your Arduino UNO with a separate power source. There is one utility example called “board_qc.ino”, which I found quite useful and it is well worth starting out with this example. This example runs through a number of “quality checks” and provides feedback on the serial monitor.

When the USB host shield is confirmed to be working, what we're then after is a CDC Terminal example that talks to a FTDI USB to UART driver and the example that is compatible is called “USBFTDILoopback.ino”. Note that there are three other CDC terminal driver examples available too, namely “acm_terminal.ino”, “XR_terminal.ino” and then some examples for “pl2303”.

To make sense of this example and to help visualise the different run states I modified the code a bit to include some logic for a blinking LED. I used a fast blink LED when the USB Host fails to initialise and a slow blinking LED when the runtime “getUsbTaskState” check shows that the USB State is not shown to be running (i.e. not equal to USB_STATE_RUNNING).

Here is the modified code:

And here is a video demonstration of the code in action:

With the logic of that example understood, I could now develop my own logic for my “brownfield” application. I started by developing a UML state sequence diagram to guide me:

Using ESP8266 to connect with CloudMQTT

As indicated above, I'm using an ESP8266 to connect to my WiFi router in order to establish a connection with and transmit data to cloudmqtt.com using MQTT as my publish and subscribe Internet transport protocol. Cloudmqtt is a hosted message broker for the Internet of Things and it has a free option for testing, although I believe the free instance option is sold out (so if you have a free account then great, if not you'll have to pay $5 per month for the “Humble Hedgehog” plan).

To get my ESP8266 to use MQTT I used an example found in the “PubSubClient” library, called “mqtt_esp8266.ino”. This library can be downloaded using the Arduino Library Manager:

I had to make a few minor tweaks to include the authorisation details and once this was added, I could then send and receive data from cloudmqtt. It was as simple as that.

Demo Time for my “Brownfield” application

Pulling all the code together was just a systems integration exercise, making sure the receiver side could understand what the transmitter side was telling it. Took a bit of work and a fair bit of testing but there's nothing complex involved on coding side, and here is the result: