An Interactive Museum Installation built with BitScope and Blade Uno.

The MAAS PowerHouse Museum sought to create an interactive exhibit to demonstrate how a Theremin works. They originally thought they'd bundle up a bulky and expensive oscilloscope and associated electronics to display the Theremin output but after meeting us the Sydney Maker Faire they decided to try something smaller and easier to mount which operated without user intervention.

They ultimately built this impressive exhibit.

Why did they do this?

Advocates of learning by doing and having fun while you do it, they sought to create an entertaining exhibit where visitors could play the theremin hear the results.

They sought a cost effective solution that could be built into the exhibit itself. It needed to be reliable, start without operator intervention and continue to work 24x7 when powered on.

Together with the off-the-shelf accessories shown here they had everything needed to build the installation.

The Raspberry Pi, powered and mounted on the BitScope Blade Uno, provided the compute platform to drive the display (via HDMI) and it ran the BitScope application.

The BitScope itself, also mounted on the Blade, was connected (via USB) to the Raspberry Pi and powered by the Blade.

The Theremin output was connected via splitters (so they could also be connected to a sound amplifier) and BNC terminated coaxial cables to the analog inputs via a BitScope probe adapter.

The entire assembly was mounted on the exhibit via the Blade's M3 mounting tabs, and the power, HDMI and audio cables routed through the back and is powered by a single 12V adapter.

The team at MAAS decided this assembly should be part of the exhibit itself, so they housed it in a transparent case.

Mounted on the exhibit next to the display and above the Theremin it resulted in a visually appealing exhibit for visitors to interact with, hear the sounds produced and watch the waveforms as they played.

We enjoyed working with the MAAS team to put this together and we're impressed with the museum exhibit they built.

This exhibit proved to be a great example of what a Raspberry Pi, BitScope and a BitScope Blade Uno can do but it's not limited to just exhibit installations.

With the launch of the new BitScope Blade range with our friends at element14 last week, we'll publish more examples like this explaining how BitScope, Blade and Raspberry Pi can be deployed.

An assembly like this offers the ability to capture, analyse and display four high speed analog channels and 16 digital via the BitScopes while also controlling up to ten digital outputs (two via relays).

All sorts of industrial modules like this can be built with Raspberry Pi, BitScope and the full range of Raspberry Pi HATs from third parties using BitScope Blade Uno.

If you have specific application requests or examples of your own, contact us! 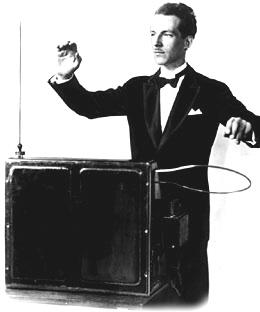 The Theremin is the world's first electronic musical instrument.

Invented in 1920 by Lev Termen, also known as Leon Theremin, it was a by-product of research into proximity sensors in Russia around that time.

It's played without touching it.

The Theremin consists of a box-like body with two antennas: one is a straight vertical rod which controls the pitch (usually on the right for right-handed players), the other is a horizontal loop (usually on the left) shaped somewhat like a cane handle which controls the volume. The pitch and volume of the note are controlled by the distance of the hands from the antennas.

The block diagram below outlines the basic circuit.

The Theremin employs heterodyning, an electronic technique that mixes two oscillators operating at different frequencies to produce a new lower frequency equal to the difference between them.

In the case of the Theremin, it's the pitch you hear.

The pitch oscillator operates at a very high (RF) frequency making it very senstive to any changes in the capacitance in resonsant circuit from which it's built. Moving your hand around the pitch antenna changes the capacitance which changes the frequency of this oscillator and therefore the heterodyne pitch that is produced.The volume control also works via proximity of the performer's hand to the other antenna.

In this case it changes the "efficiency" of the a separate RF oscillator. The closer your hand is to the antenna the lower the amplitude of the oscillator. This amplitude is turned into a volume signal using an envelope detector (a diode rectifier) and applied to the output changing the volume heard at the output.

In the case of the MAAS exhibit, the Theremin output is displayed as a waveform and (optionally) as a spectrum. As visitors play the Theremin they can see the waveform pitch (visible as a changing number of waveform cycles on the display) and the volume (visible as the vertical size of the waveform).

While they did not do this, it would be possible to use the BitScope to display the operation of the pitch and volume oscillators inside the Theremin and analyse how its electronic circuits work but we'll leave that for another day!