How to assemble and get started using BitScope Blade.

This is the first in a series we'll post about using BitScope Blade and the obvious place to start is unboxing and assembling it. Blade is a robust industrial deployment solution for Raspberry Pi. How you assemble it and the ways you can power and mount it will depend on how you want to use it. We'll follow up with more information about the power and software options and cover some new projects you can build with it. Read on here to get started...

BitScope Blade is available in three editions; Blade UnoBlade Uno, Blade DuoBlade Duo and Blade QuattroBlade Quattro. Each of them powers and mounts one, two or four Raspberry Pi. They also support a range of peripherals such as Raspberry Pi HATRaspberry Pi HAT, CamerasCameras, DisplayDisplay, BitScopeBitScope and a lot more. 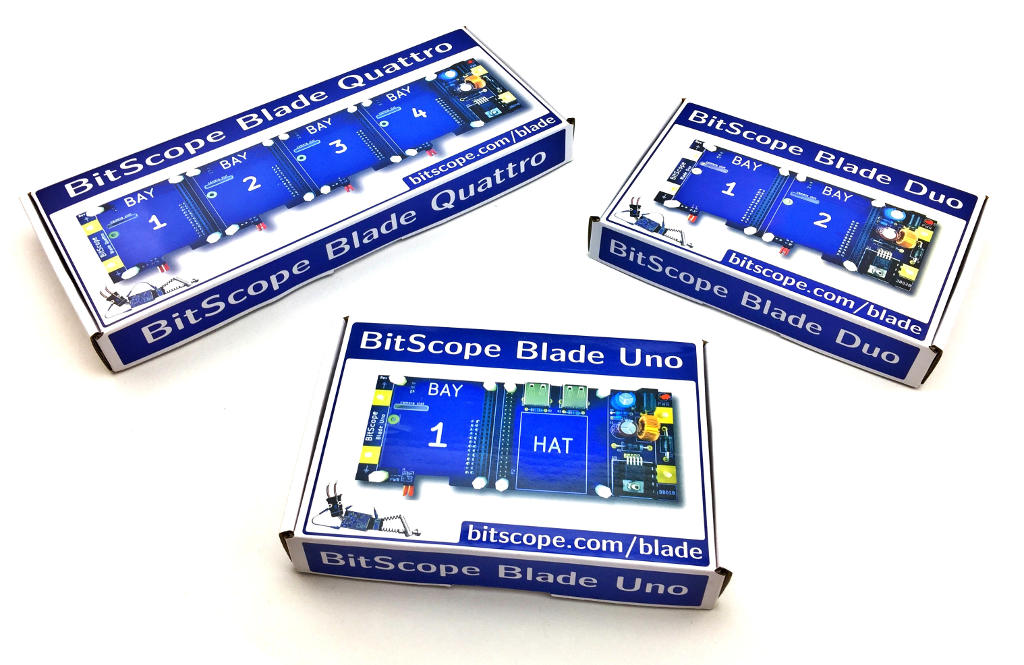 We publish software for Raspberry Pi to make it easy to use and build solutions ranging from single test and measurement or embedded computing systems to full sized compute clusters. Check out this recent post to learn what Blade can do and some typical Blade applications.

In the post you're reading now we describe the Blade package and how to assemble it to get started.

In the package is the Blade (Uno, Duo or Quattro), a Quick Start Guide, Product Compliance Statement, a Safety Guide and set of screws, spacers and mounting tabs, shown here for Blade Quattro.

A wide range of power sources, from plug packs to batteries or solar panels and more may be used with Blade.

In principle, using Blade is as simple is plugging in one or more Raspberry Pi and optionally HAT, CAP or HUB cards, inserting a programmed SD card and connecting the power. However, there are few preparation steps first.

After unpacking your BitScope Blade, the first thing to do is install the nylon spacers.

These are required to mount the Raspberry Pi in each BAY and a HAT (if using Blade Uno). Repeat for each corner in each Raspberry Pi and the HAT BAY.

The stand-offs make it easy to sit the Blade on a flat surface. Install them like this.

There are four stand-offs supplied, one for each corner of the Blade. The stand-offs have adhesive feet so you can peel off the labels and stick the Blade to your desktop or use them to mount the Blade on a wall. Once they have been stuck onto a surface they cannot be removed (without destroying the adhesive) so choose where you want the Blade carefully before removing the labels. However, the Blade can be removed from the stand-offs by carefully squeezing the post.

The red power shunt should be pre-installed but if not, connect it as shown here. 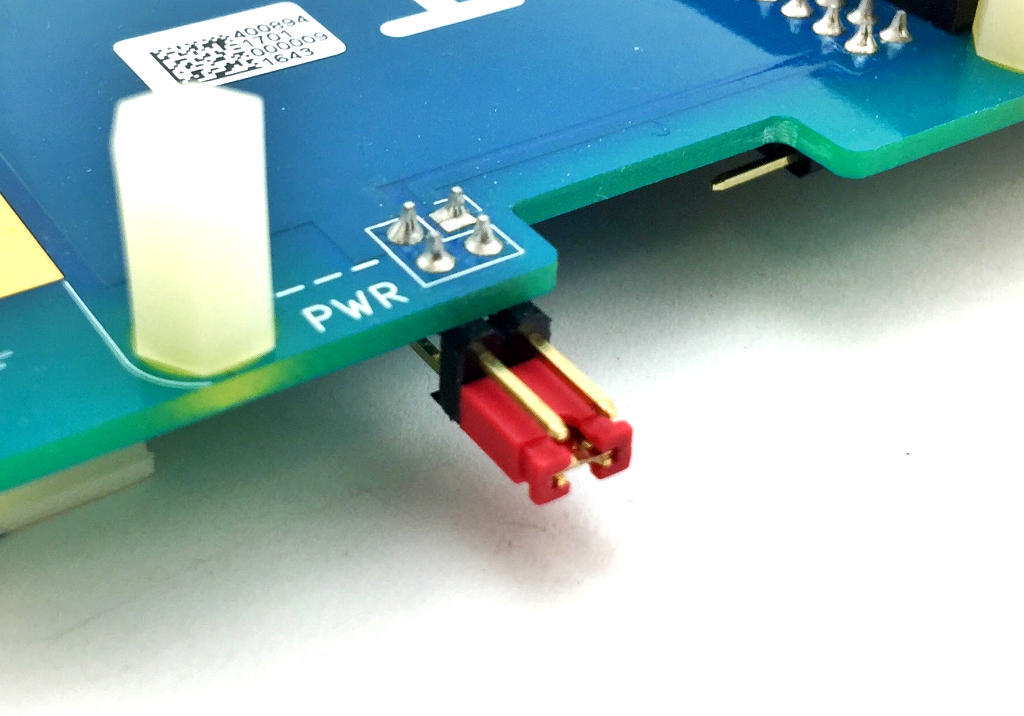 The power shunt allows the Raspberry Pi to be powered on and off without disconnecting power to the Blade itself. Normally it's connected and left as is. In a Blade rack or other type of multi-Blade installation and with Blade Duo and Quattro, it allows each Raspberry Pi to be individually powered down (e.g. to replace an SD card).

If you're using Raspberry Pi 3 and plan to mount the Blade in an enclosure or a confined space with limited ventilation, we recommend you apply a heatsink like this. 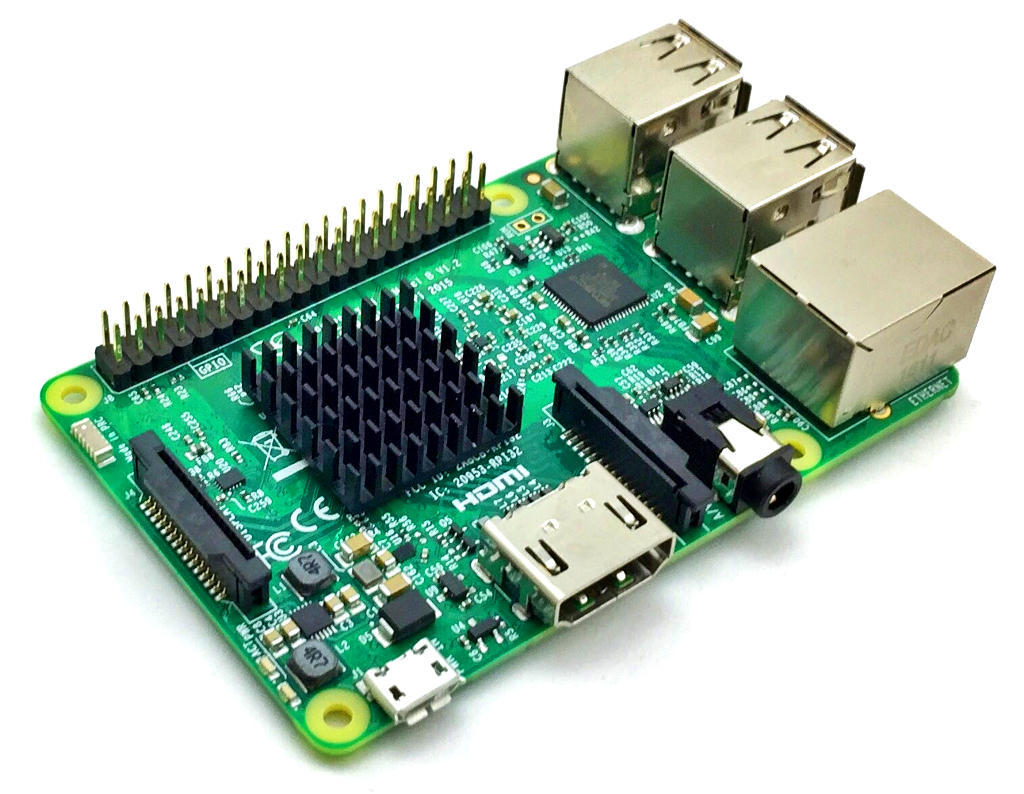 If the Blade is mounted vertically (e.g. on a wall) or in a ventilated Blade Rack a heatsink may not be necessary but if you're planning on doing some compute intensive work, we'd still recommend it. If you're using using Raspberry Pi 2 or Model B+ or A+ a heatsink is unlikely to be necessary. Heatsinks are sold separately. 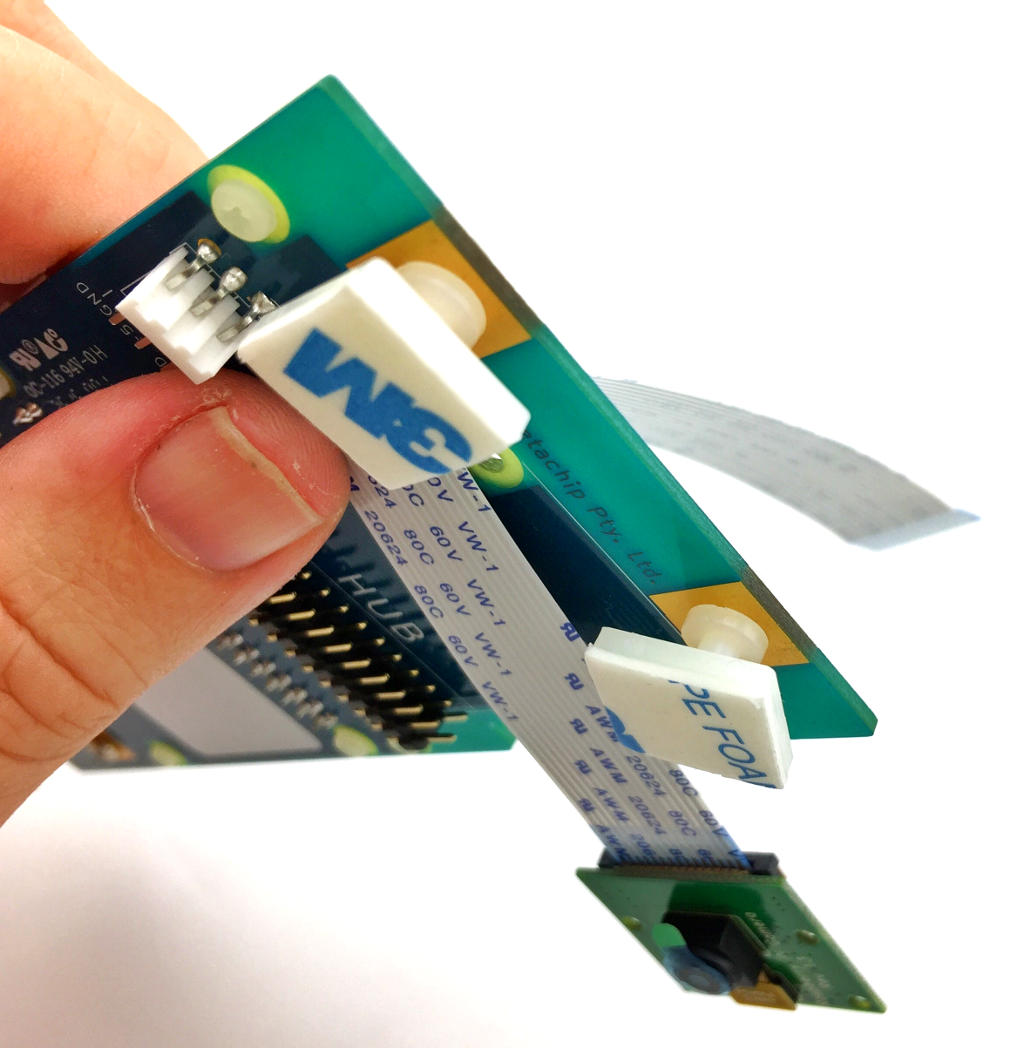 Likewise you can connect an audio cable to the Raspberry in BAY 1 as well. In both cases, this can be done after the Blade is fully assembled.

Plug in a Raspberry Pi in each Pi BAY you plan to use on the Blade.

If you're using one or more HUB Cards, connect them underneath each BAY as shown.

It's probably best to install the card in BAY 1 before you connect the stand-offs. However, if the stand-offs are already installed they can be removed temporarily quite easily.

If you're using Blade Uno, you can install almost any Raspberry Pi compatible HAT.

All the J8 connector signals from the Raspberry Pi are made available to the HAT BAY so regardless of whether the HAT uses GPIO, I2C, SPI or serial I/O, they will work with Blade. BitScope Blade also accepts BitScope "extended HATs" (which we call "CAPs"). These devices have the same form factor as Raspberry Pi and can be mounted on any Blade including Duo and Blade Quattro.

The last step before applying power is to tighten all the screws and install the SD cards.

It's not strictly necessary to install the screws if you're planning to remove and reconnect the Raspberry Pi and/or HAT frequently as the friction of the connectors will hold both in place on a desktop. However, if you're using this in an installation we highly recommend all screws be used to ensure nothing comes loose.

When the SD card is plugged in, you're ready to connect power and use your Blade. Don't remove an SD card from a Raspberry Pi when power is applied to the Blade unless you have disconnected the BAY power from by removing the shunt. On Blade Duo and Quattro, it's also possible to signal or interrupt the Pi via this header.

Normally power is applied to the Blade via the 2.1mm power socket.

Any power source terminated with a 2.1mm (centre-positive) plug and rated between 9V and 48V of 20W or more (10W minimum for Blade Uno and Duo) may be used.

IMPORTANT: the original Blade boards used a 2.5mm socket. The new ones use 2.1mm. There are a number of reasons for this change which we'll explain an a forthcoming post. Adapters to convert between them are available.

Step #11 Connect Power via the tabs

There is an alternative way to power any Blade, via the mounting tabs. 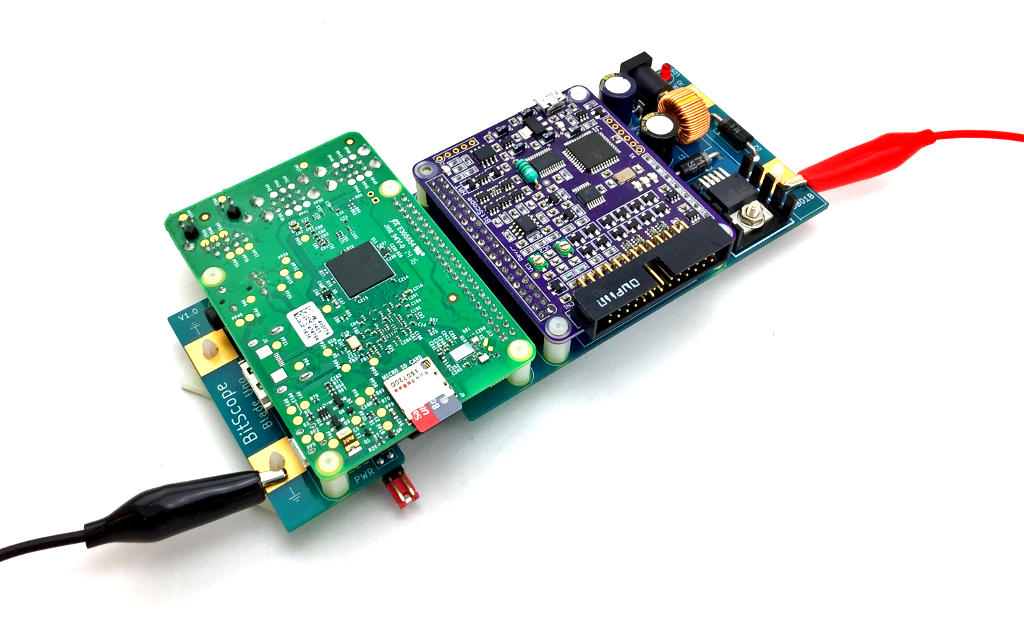 Alligator leads are shown here to make polarity clear but normally this method of power is used in Blade Packs and Blade Racks to minimise power wiring like this: 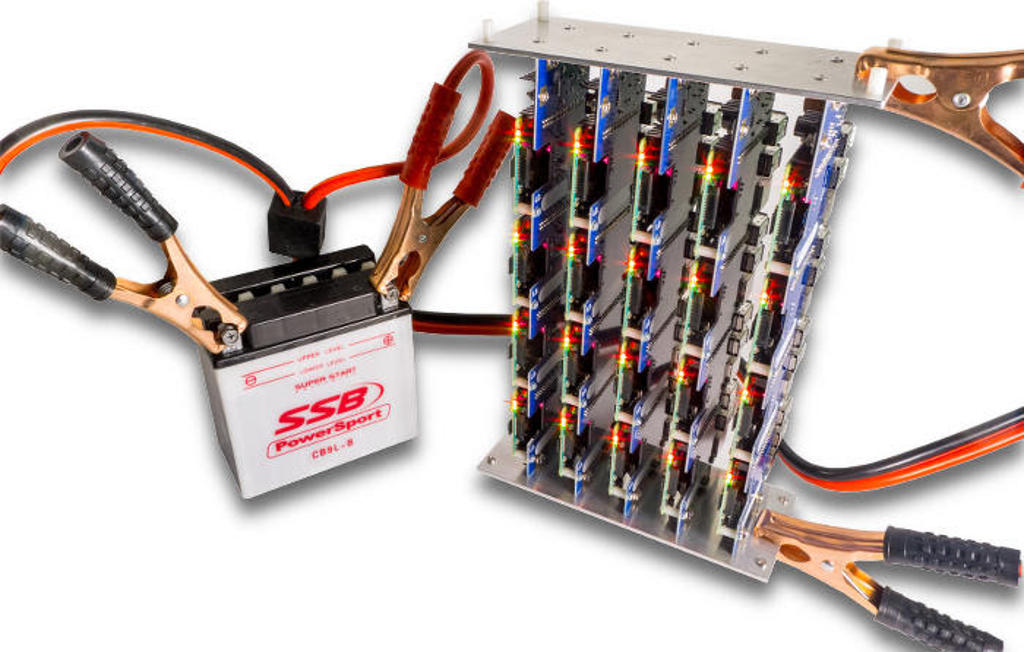 It's not necessary to use the tabs, indeed they can be shorted together and power applied via the 2.1mm power sockets on each Blade (because Blades include a blocking diode). At this point you're ready to go. There are quite a few things we've mentioned but not yet explained such as BitScope CAPs, BitScope Blade Cluster Packs and Racks, power supply options, software choices and more. We'll publish full details in new posts soon.