It's hard to spot the difference just looking at it but the new Raspberry Pi 3 pictured above with its predecessors is the latest iteration of Raspberry Pi in the popular "Model B" form factor and it's a cracker ! 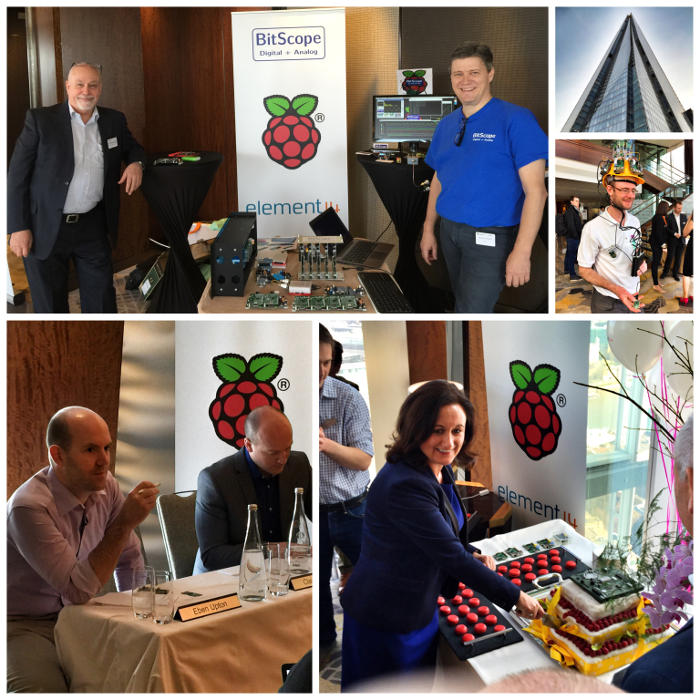 Our friends at Raspberry Pi and element14 gave us samples and invited us to exhibit BitScope Blade at the Raspberry Pi 3 launch held today at the Shard in London. Eben introduced this new model to the world as we celebrated Raspberry Pi's fourth birthday. We exhibited BitScope Blade industrial deployment solutions using Raspberry Pi 3 and found what we've come to expect; everything just worked. Raspberry Pi 3 is based on the brand new BCM2837 64 bit quad-core CPU from Broadcom. This chip is fully backward compatible with the 32 bit BCM2836 and BCM2835 versions used in the earlier models as it also supports 32 bit code. The new CPU is a great enhancement but a most welcome new feature is the built-in WiFi and Bluetooth.

Since we launched BitScope Blade a couple of months ago, many people have taken to using WiFi dongles to network connect their Raspberry Pi to each other (instead of Ethernet switches and cables). While this works, it is no match for the reliability and higher bandwidth of a wired connection but on the flip side it does offer the physical simplicity of wireless connectivity. Wouldn't it be great if WiFi was built-in? 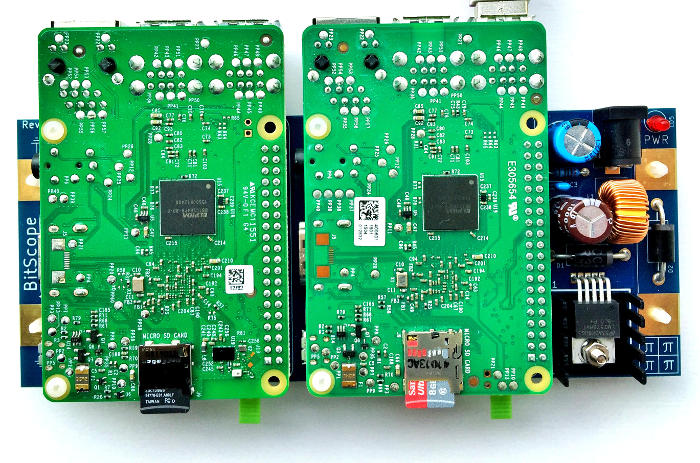 With the new Raspberry Pi 3 you how get 802.11n WiFi built-in which is not only more reliable than a USB WiFi dongle it's also much faster. Of course WiFi networks and hotspots are ubiquitous so the Pi3's built-in WiFi makes this model very convenient and useful in almost any use-case and it all works with earlier models via USB WiFi dongles too. Indeed, this is how Bruce connected many Raspberry Pi 3 together for BitScope Blade and BitScope Micro demos he exhibited at the official launch of the Raspberry Pi 3 earlier today. One Duo Pi loaded with a Raspberry Pi 3 and 2 side by side (as shown here) also proved very useful stand-alone test bed in the hotel room when he was setting up. 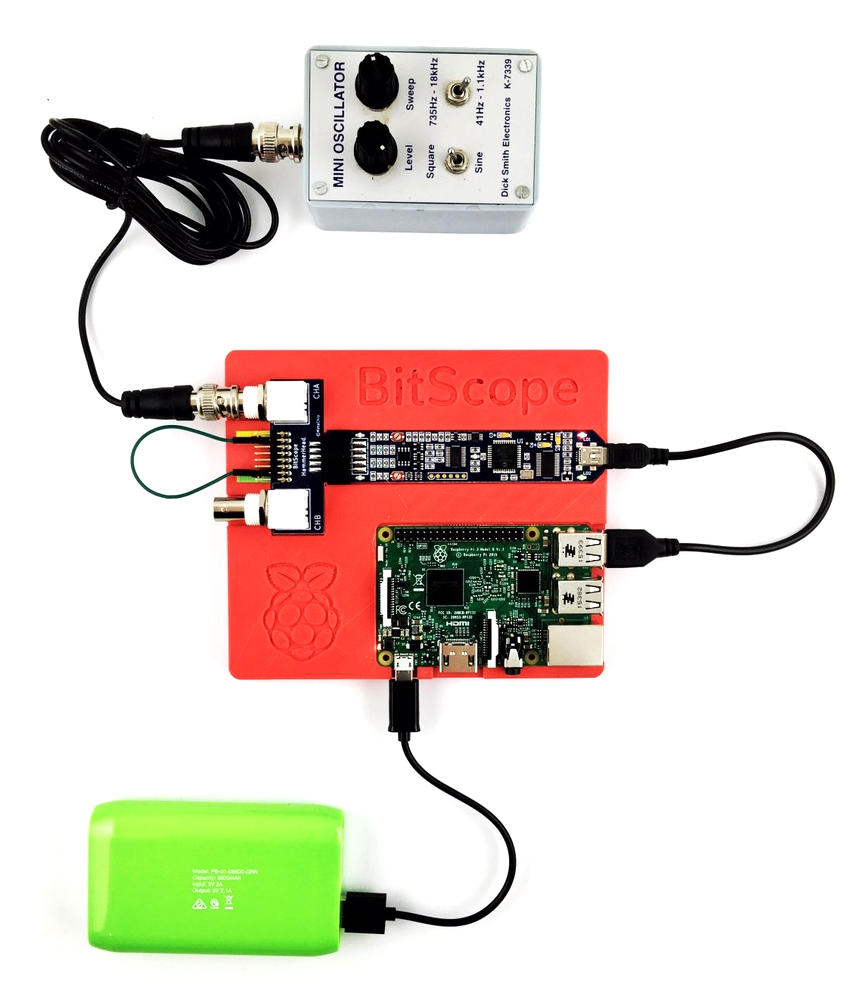 The Internet Of Things

The set up shown here is what Bruce used to demonstrate one example of what the Internet of Things (IoT) might look like, in this case for test & measurement One BitScope Micro and port adapter was connected to a small signal generator and controlled by a Raspberry Pi 3 which was powered from a 5V battery. The Raspberry Pi was configured as a WiFi Access Point running BitScope Server and Node.js so visitors could connect their phones wirelessly. By opening the web browser on their phone, visitors were able to view waveforms generated by the oscillator without any power or network wiring connecting their phone to the BitScope. Using simple controls on the web app on the phone they could change the timebase, voltage ranges and trigger settings. All the software required was hosted on the Raspberry Pi 3 itself. No special software or apps were required on the phones. He did this to demonstrate the flexible software, power and wireless connection options offered by Raspberry Pi 3; the essential elements for any IoT application.

The Cloud and Compute Clusters

Of course the other side of the equation in IoT is the cloud, where "the intelligence" of the devices resides. With BitScope Blade, Raspberry Pi 3 has got that covered too ! 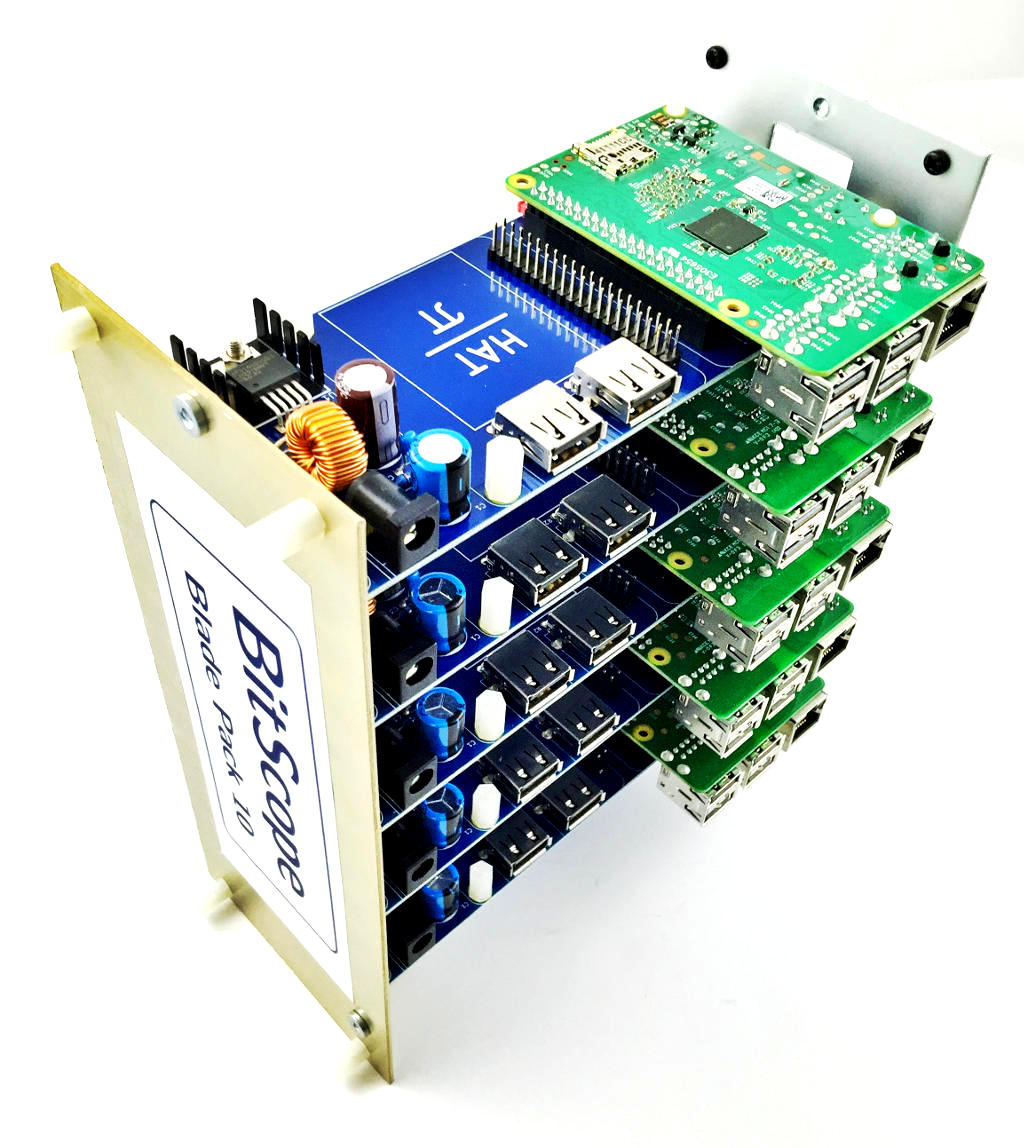 Whether it's physical or cluster computing for data acquistion and number crunching or distributed processing for private, hybrid or public clouds, Raspberry Pi 3 makes it all very easy to build. Shown here is a BitScope Blade Pack 10 populated with Uno Pi (instead of the usual Duo Pi) with one Raspberry Pi and space for one HAT on each blade. BitScope Blade Packs power each blade via the end plates so no power wiring is required and now with Raspberry Pi 3, no network wiring is required either because WiFi can be used instead. In one compact unit a physical computing system can be built including the I/O (via HAT devices, more on this soon). Alternatively, using Duo Pi a pure compute cluster can be constructed, with wireless internal networking and connection with external IoT devices like the one above. Another benefit of the new Raspberry Pi is the quad-core 64 bit CPU which affords greater compute capacity in any size cluser and the Bluetooth Low Energy (BLE) connectivity options for connecting even the smallest and low power of IoT devices.

Raspberry Pi has always been a great low cost compute platform, whether for the educational purposes for which it was originally designed or the huge range of domestic and industrial applications in which it's been deployed since.

We developed BitScope Blade to make it easy to embed Raspberry Pi into a wide range of these sorts of applications. The new Raspberry Pi 3, with its 64 bit performance and full wireless stack makes it even easier to develop reliable physical computing systems at very low cost. Whether it's a single IoT device like a BitScope Micro based data acquisition system or a large compute cluster with network connection or monitoring systems running real-time analytics for manufacture operations such as the Oden System, BitScope and Raspberry Pi offer effective low cost solutions.